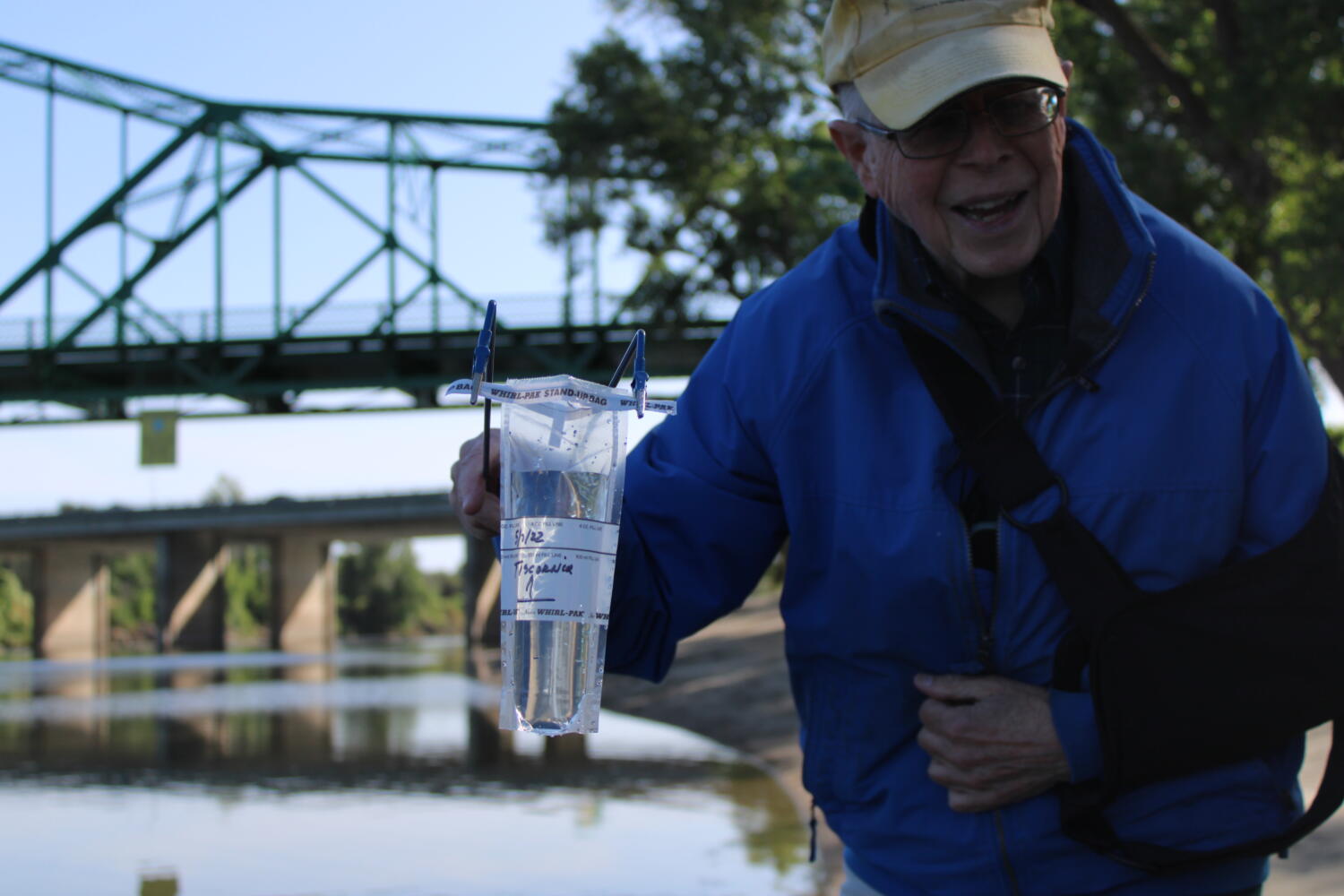 When the California Humanities Emerging Journalist Fellowship  team at Sierra College started researching the role of water in the community and the American River, one group they came across was the Save the American River Association (SARA). Through SARA, journalist fellow, Madalyn Wright discovered local water caretakers, Bob and Mary Beth Metcalf, who spend their Saturday mornings testing the river water for E. coli bacteria. To learn just how accessible this citizen science is, Wright, their 5-year old daughter, Thea, and their partner Ryan Moskun joined the Metcalfs on May 7, 2022, for a morning of pipettes and learning in a parking lot science lab. 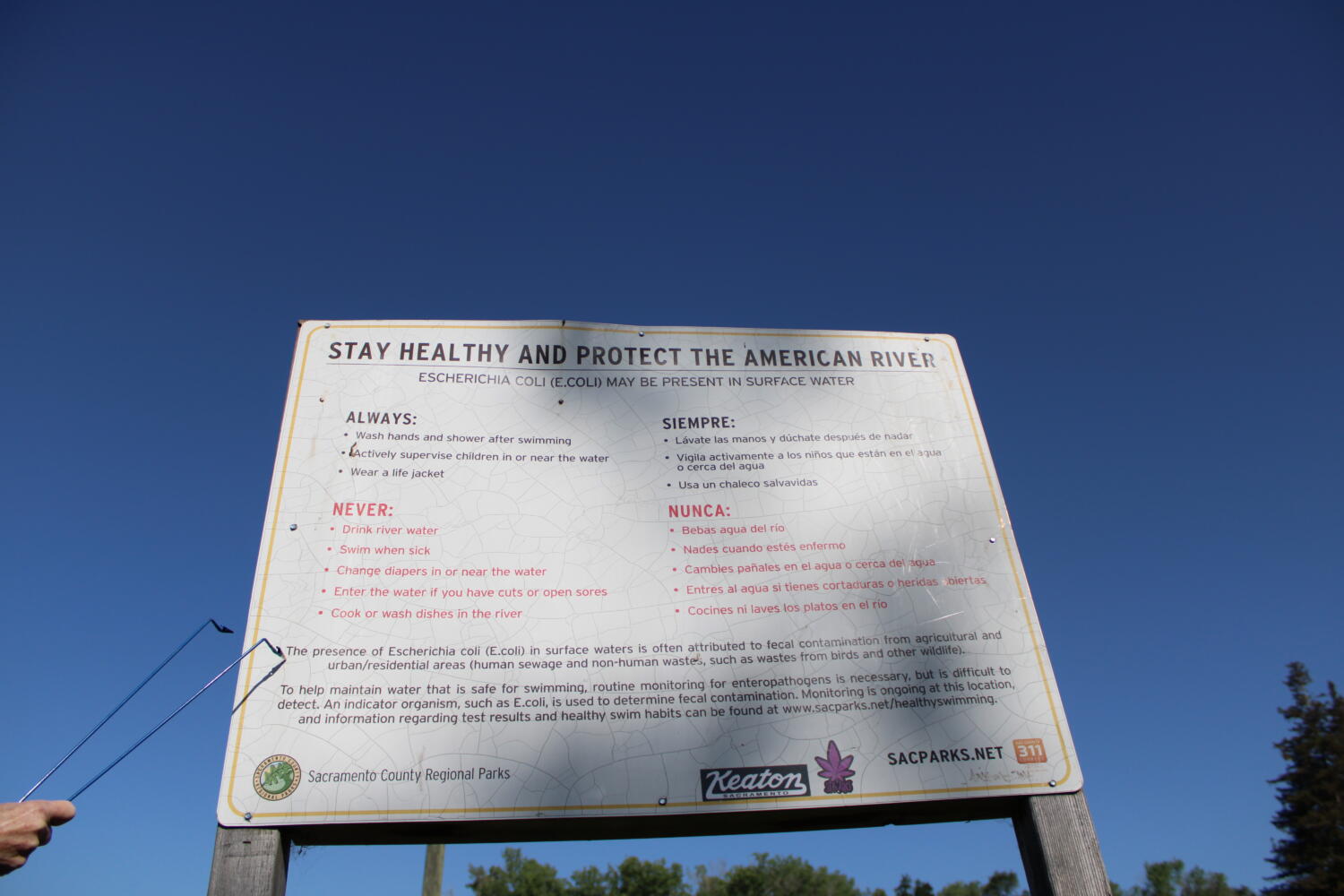 Bob Metcalf, retired professor of Biological Sciences at Sacramento State University, pointing at ineffective E. coli sign at the Steelhead Creek boat launch. SARA has been advocating for better signs that warn the community about the E. coli risk. In a discussion on the current signage, Mr. Metcalf states, “When [the E. coli content] exceeds EPA levels, you know, it doesn’t warn. And who understands this stuff? Caution: May exceed EPA levels of fecal contamination– that’s what we’ve suggested and so far there hasn’t been anything done about it.” 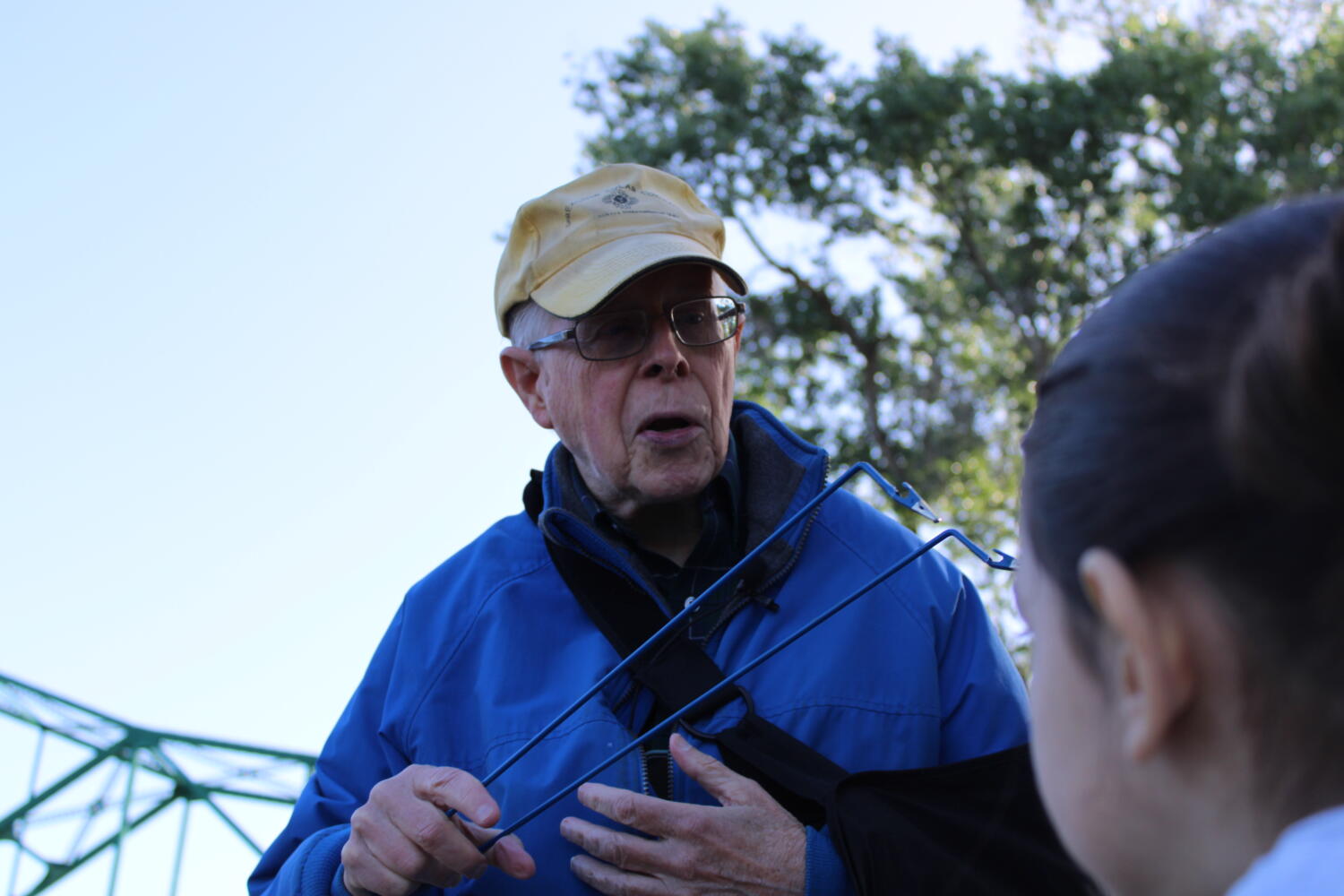 Mr. Metcalf, explaining to Thea how to collect the water samples at the first sample site at Tiscronia Beach- dubbed throughout the Metcalf’s sampling routine as Tiscronia One. Mr. Metcalf and his wife, retired Clinical Professor of Pediatrics at UC Davis, Mary Beth Metcalf, sample the same areas almost every Saturday morning. On this particular Saturday, Mr. Metcalf was still out sampling even with a broken collarbone from a recent cycling accident. 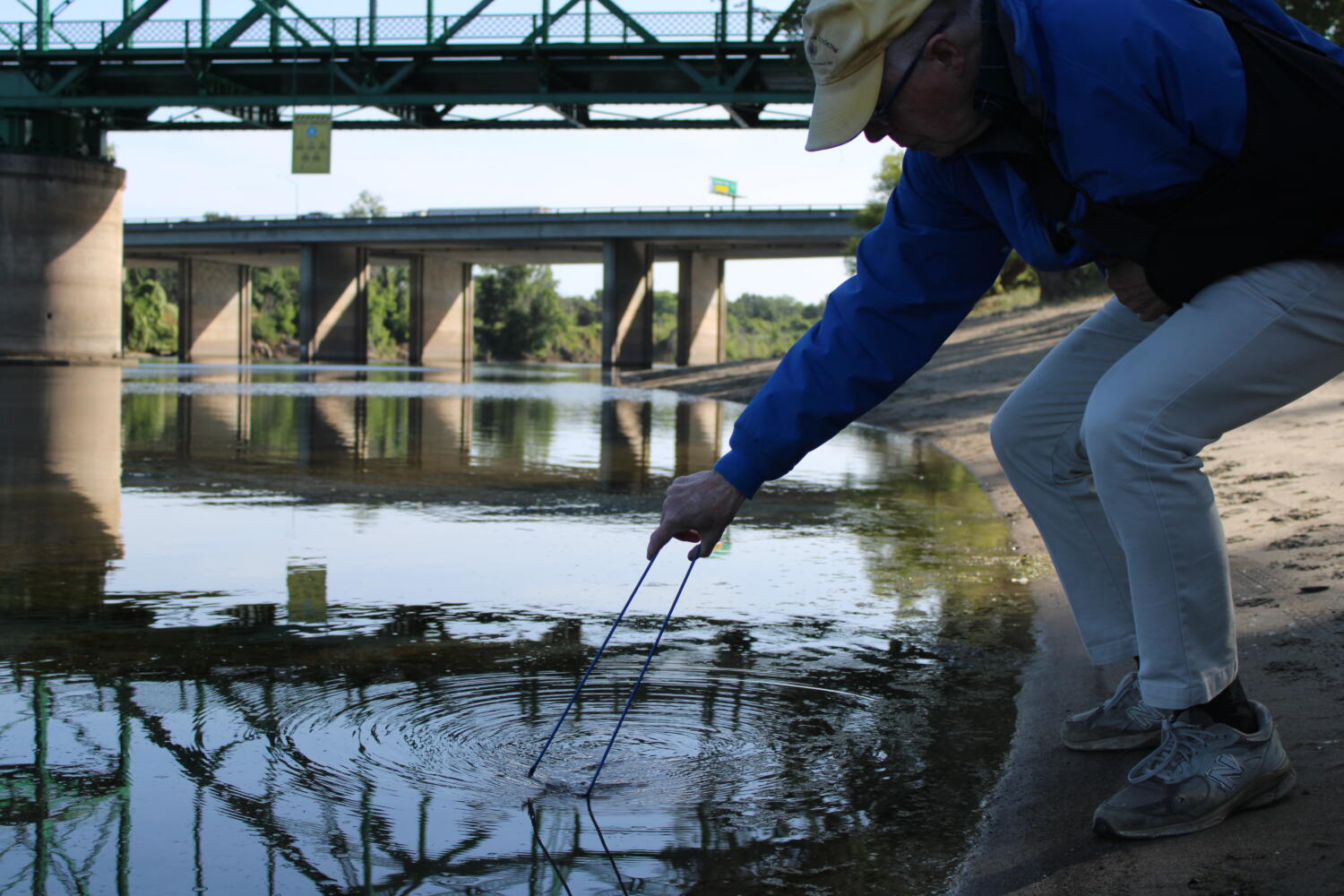 Mr. Metcalf using a gripping tool to dunk the sampling bag, a Whirl-Pak Stand-Up bag, into the water at site Tiscornia One. Tiscornia Beach is right at the mouth of the American River where it meets with the Sacramento River. The soft sandy beach and calm water make it a popular destination for families with small children.

Mr. Metcalf holding the full Tiscornia One sampling bag fresh out of the river. The bags are labeled before collecting the water with the sample site and collection date. The U.S. Environmental Protection Agency (EPA) maximum level of E. coli in recreational water is 3.2 E. coli per 1 milliliter of water. 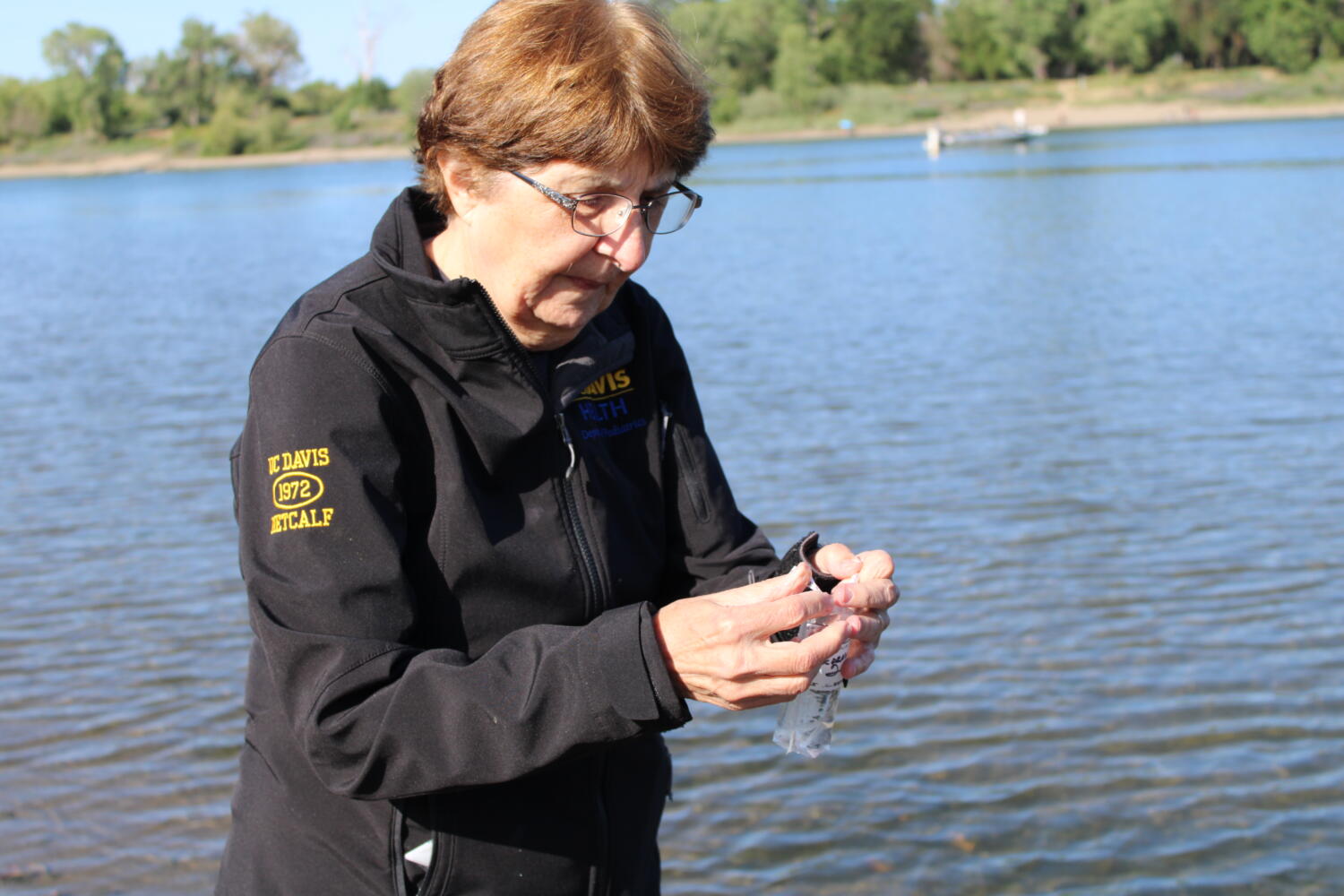 Mrs. Metcalf seals a water sample taken at site Tiscornia Two by holding the ends and spinning the bag around itself then closing the twist-tie ends. Not all E. coli bacteria are bad- but in water, it is often an indicator of serious diseases including Shigella and Salmonella. 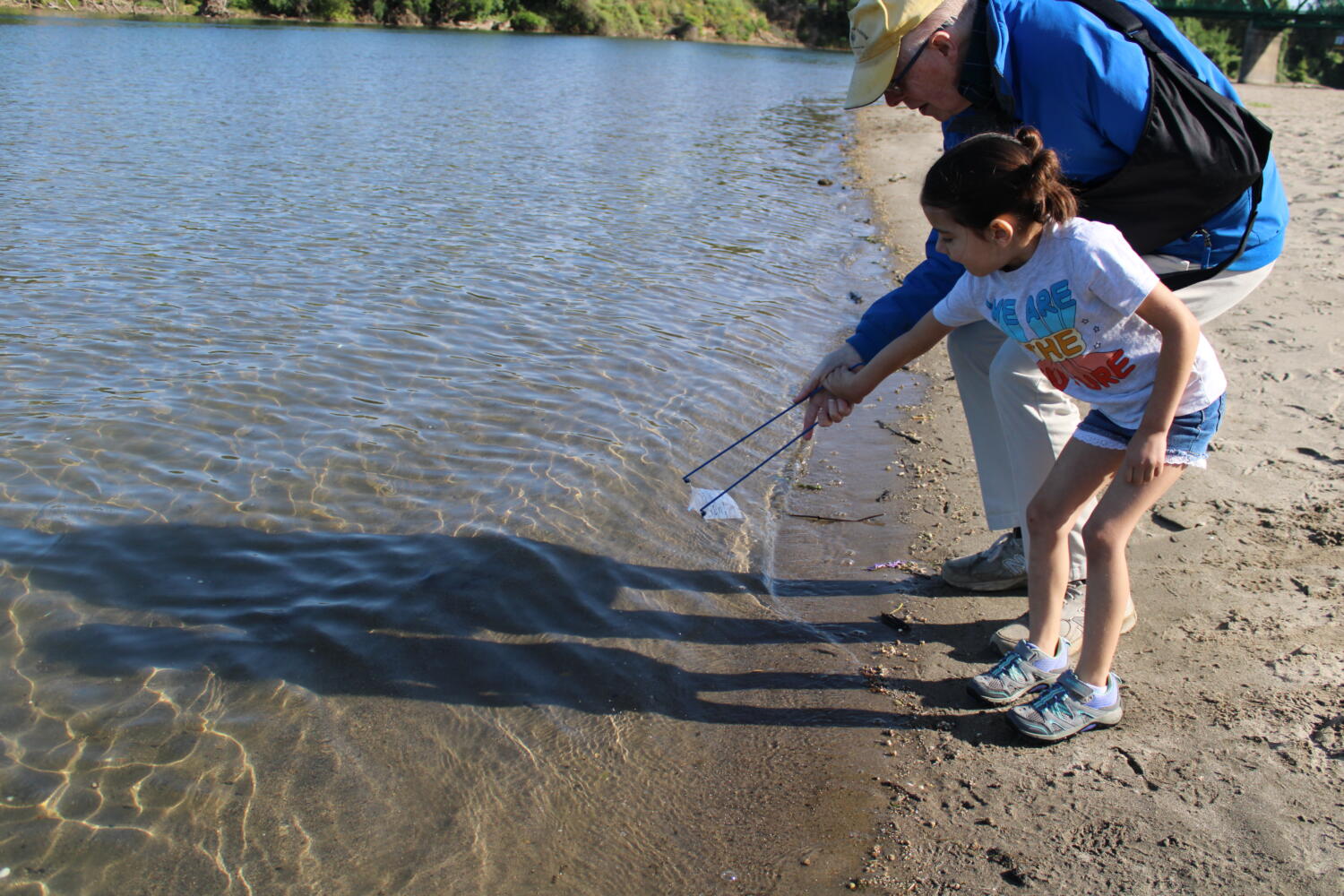 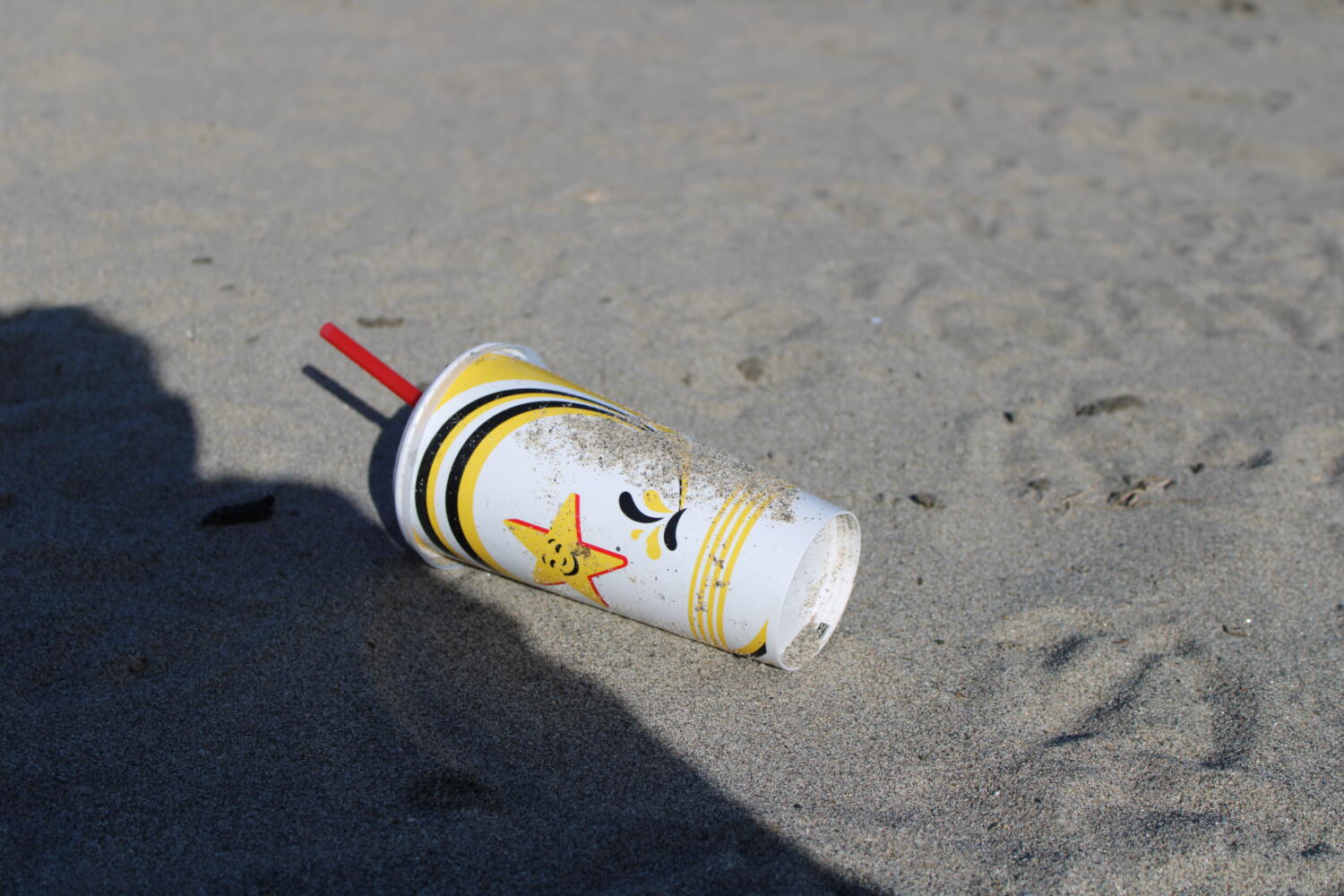 A fast-food cup discarded on the shores of Tiscornia Beach. 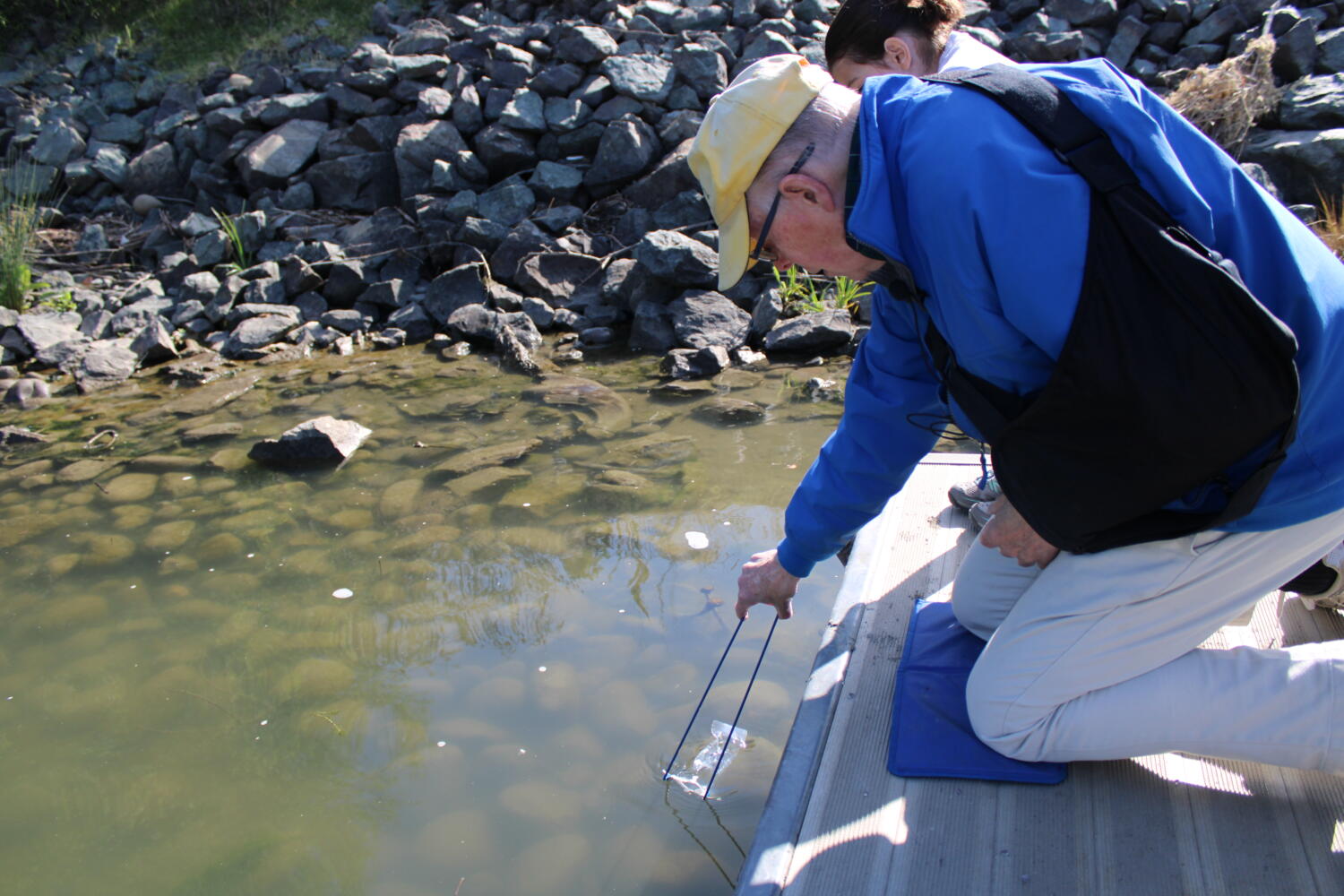 Mr. Metcalf kneeling on the wobbly dock with Thea at the Steelhead Creek boat launch to take the final water samples of the day. This area of Steelhead Creek is a popular boat site, but also prone to illegal dumping. 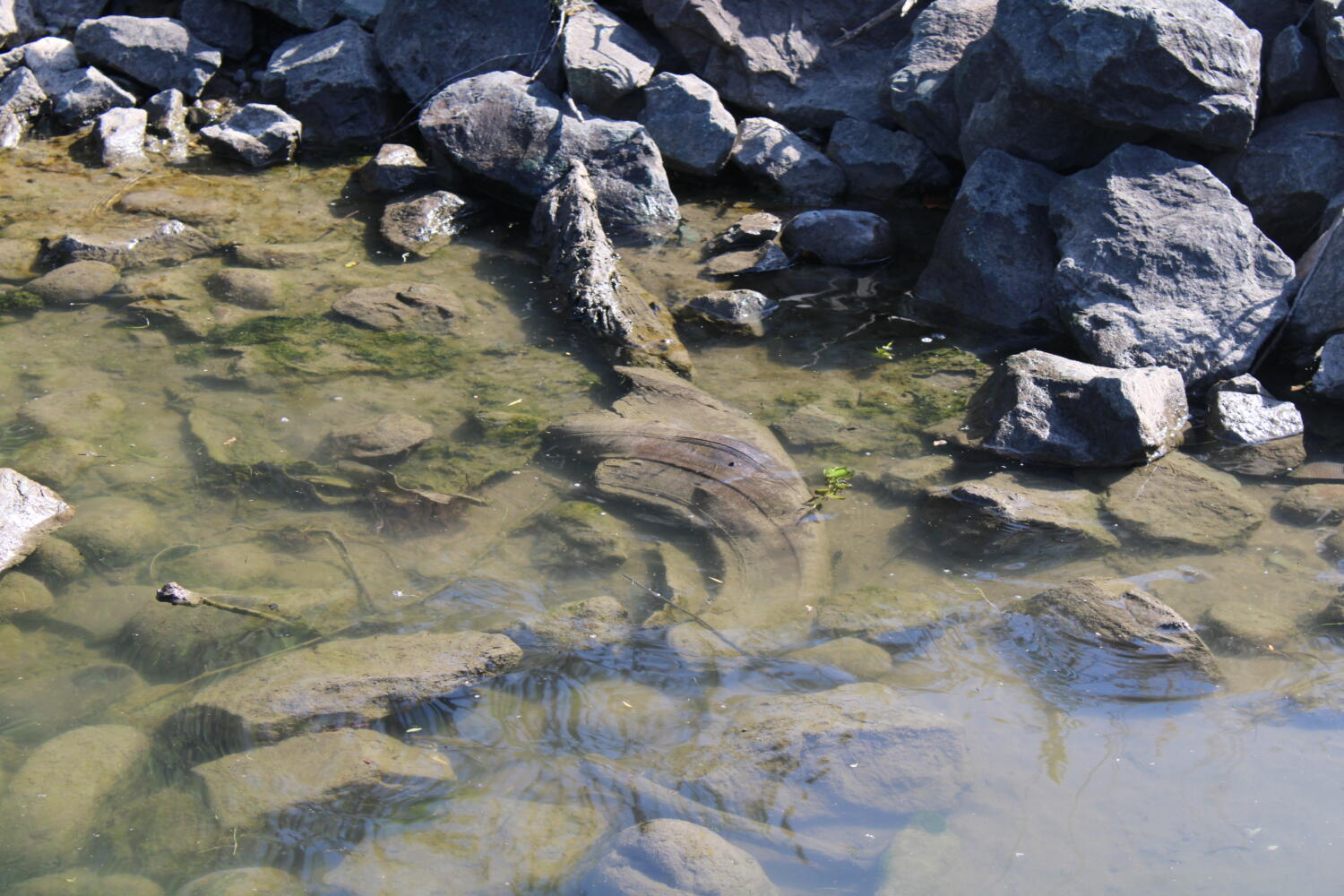 A tire on the bank of Steelhead Creek. 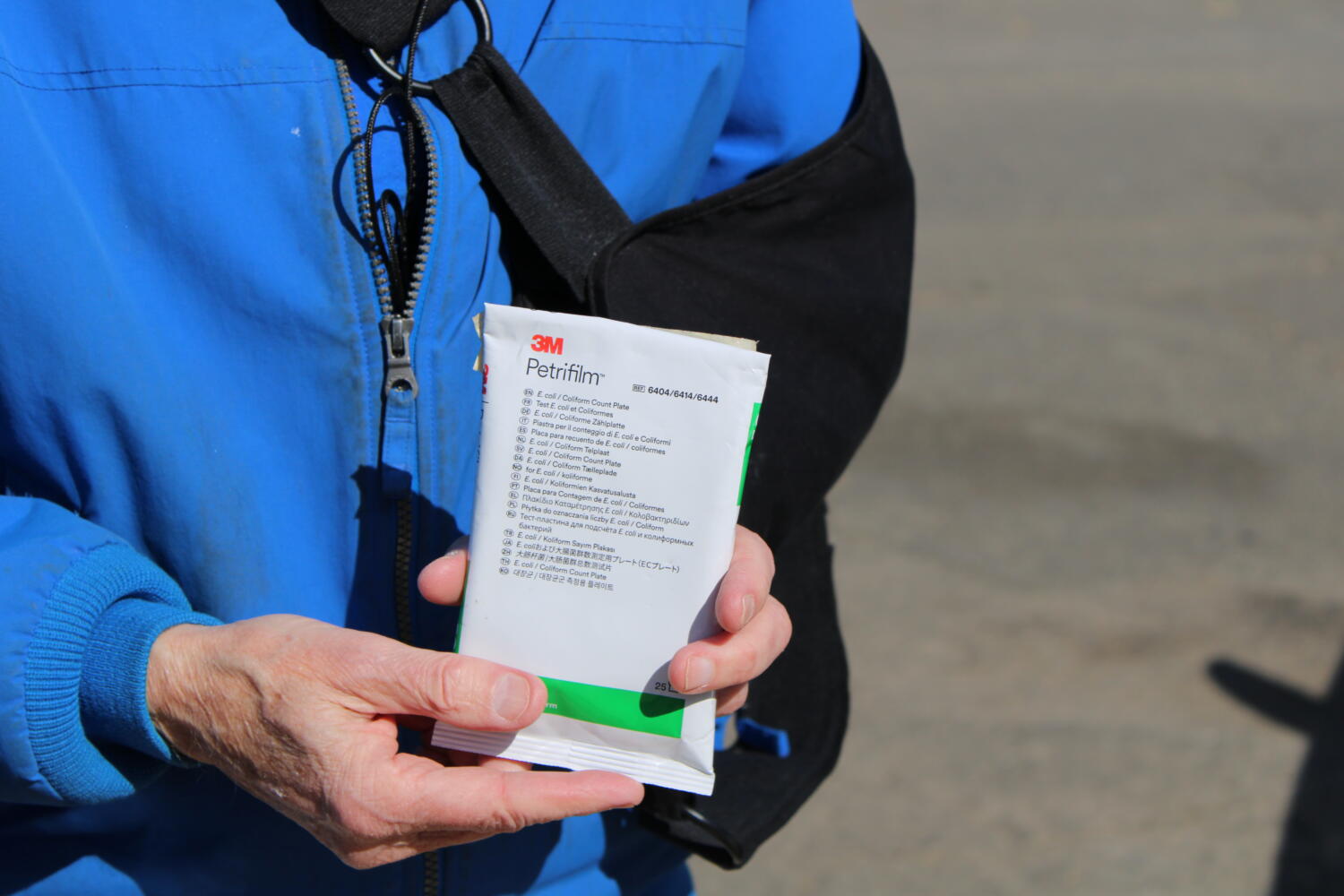 Mr. Metcalf explaining the 3M Pertifilms that are used to test the water samples. “In microbiology people quite often use Petri dishes to grow bacteria and they put some nutrients for bacteria in it. This was developed by the 3M company in the 1990s for the food industry- where if you’re going to be testing for bacteria in foods, you have to take 25 grams of food and blend it with water. And then you’re always testing one milliliter. So this is how the food industry tests for this bacterium E. coli and it works wonderfully on water,” he explained. 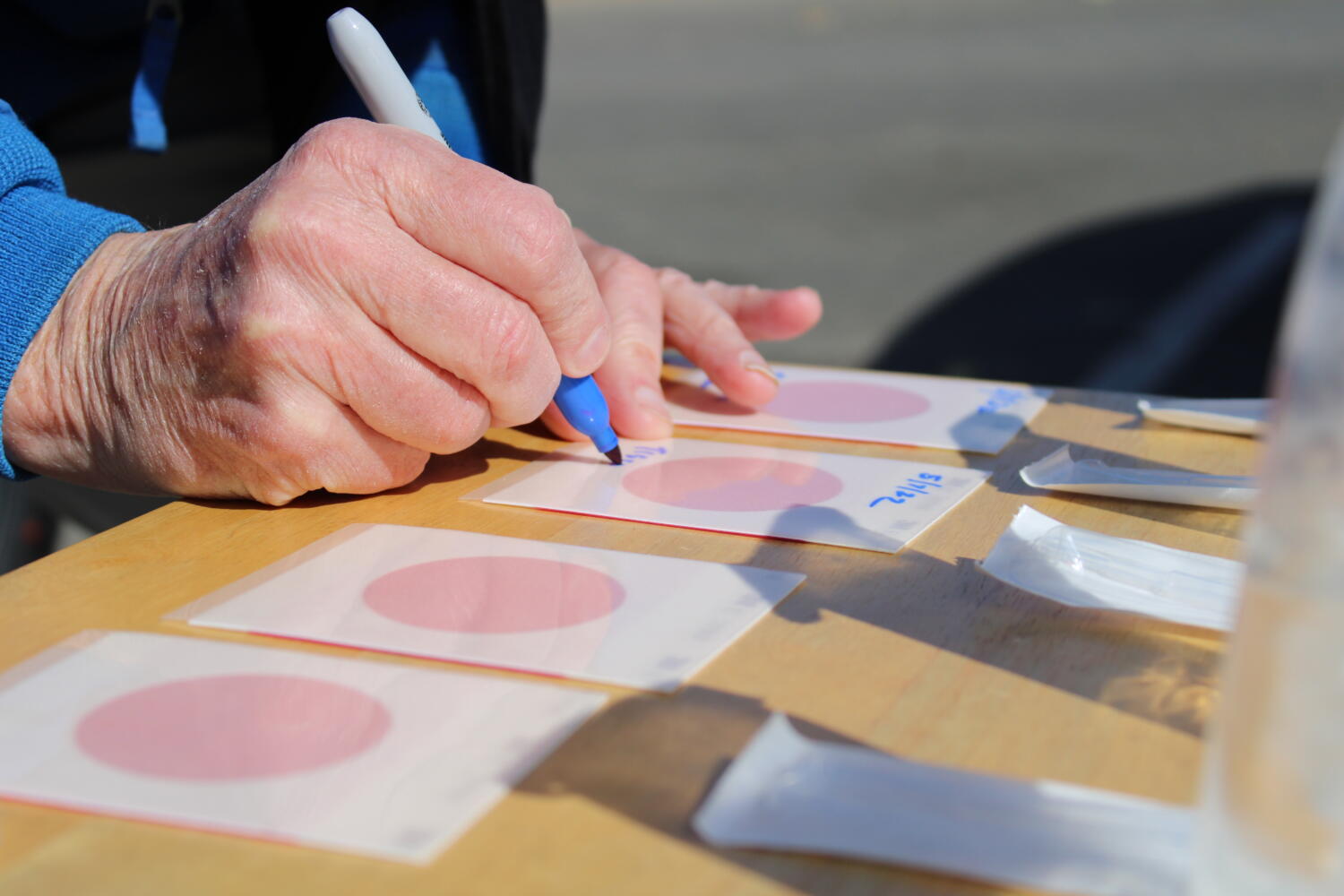 Mr. Metcalf labeling the Petrifilms with the date and sample sites at the pop-up microbiology lab the Metcalfs set up in the parking lot near the Steelhead Creek boat launch. Each film gets its own sterile pipette to transfer the water from the sample bag to the film and avoid cross-contamination. 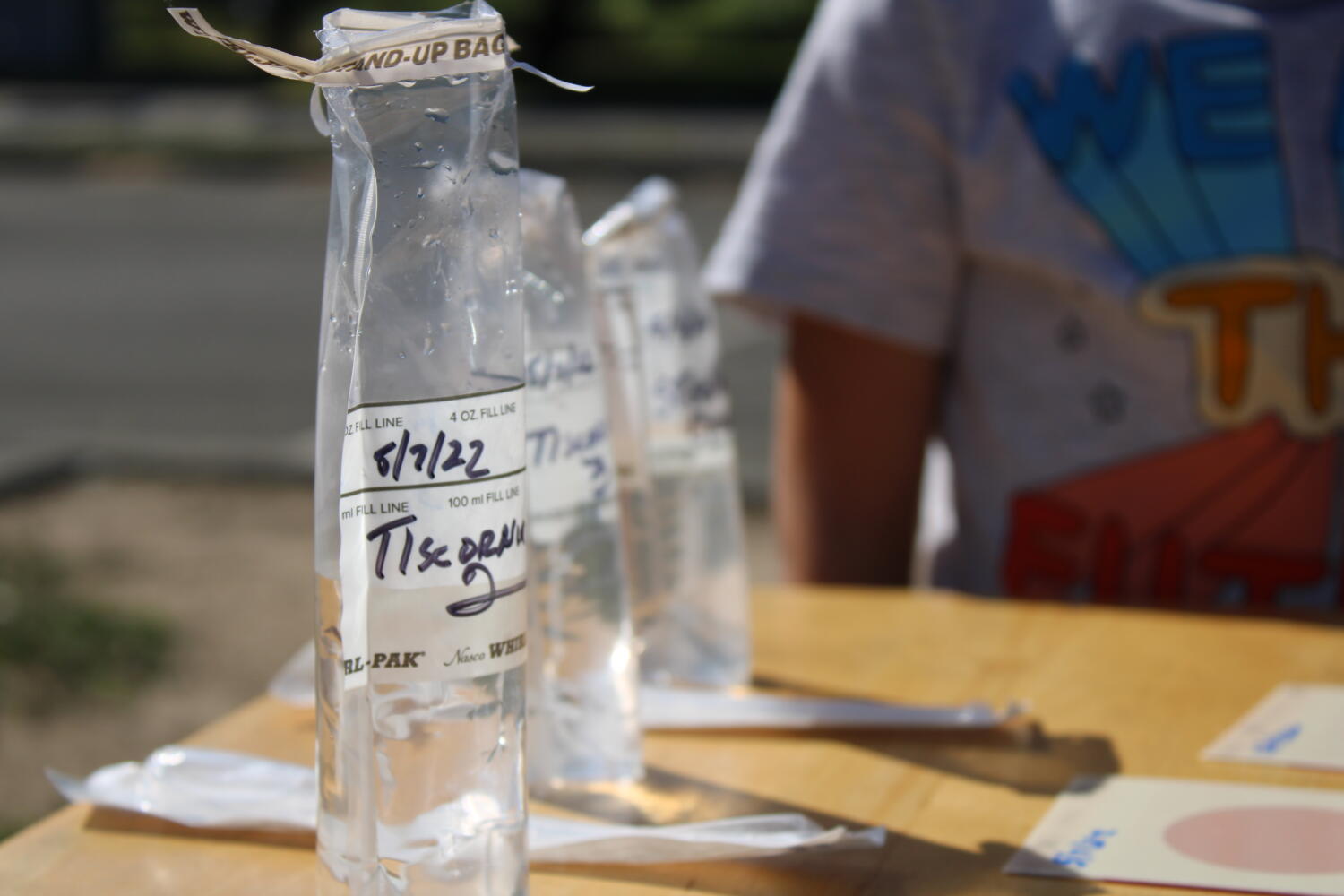 The Tiscornia Two sample open and ready for a one-milliliter transfer to a Pertifilm. 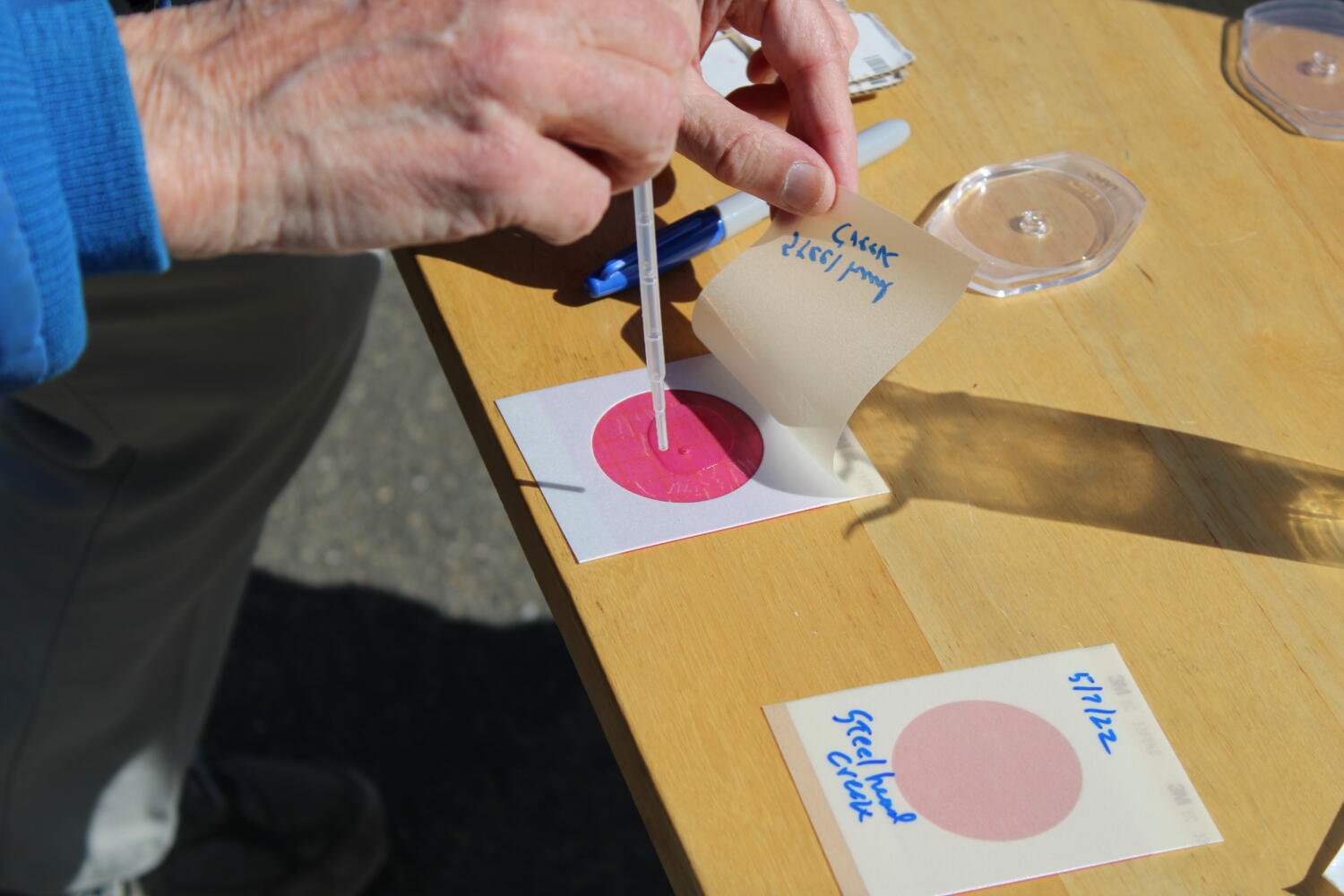 Mr. Metcalf using a sterile pipette to place one milliliter of water on the Pertifilm. The pink space has bacteria food in it, which allows the bacteria colonies to grow to sizes that can be viewed without a microscope. 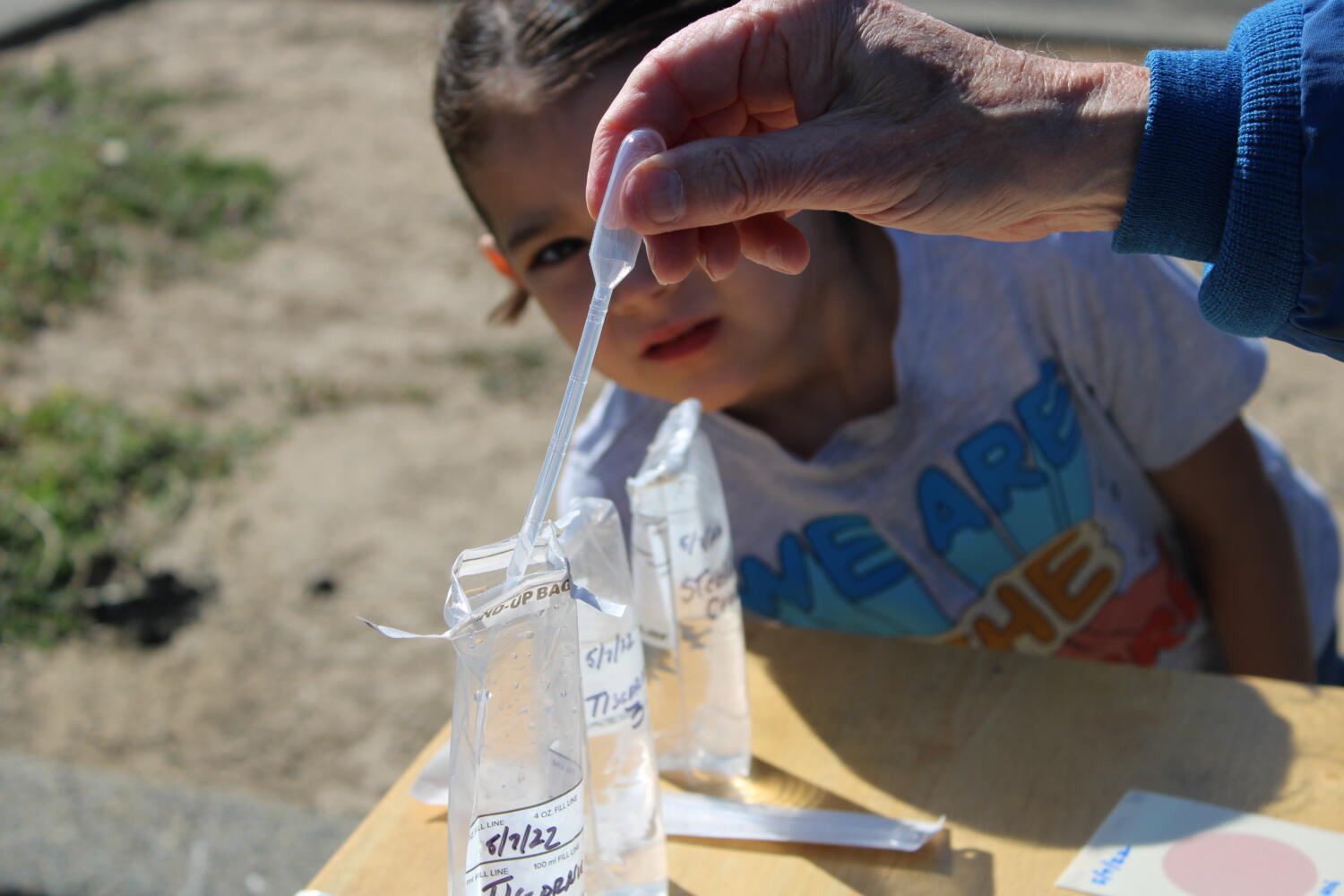 Thea observing Mr. Metcalf fill the pipette to exactly one milliliter, ready for her turn to be the scientist. “It’s a little tricky just getting one ml until you’re really used to it,” Mrs. Metcalf stated. Both Metcalfs joke that getting just one milliliter in the pipette is the hardest part for people to get right. 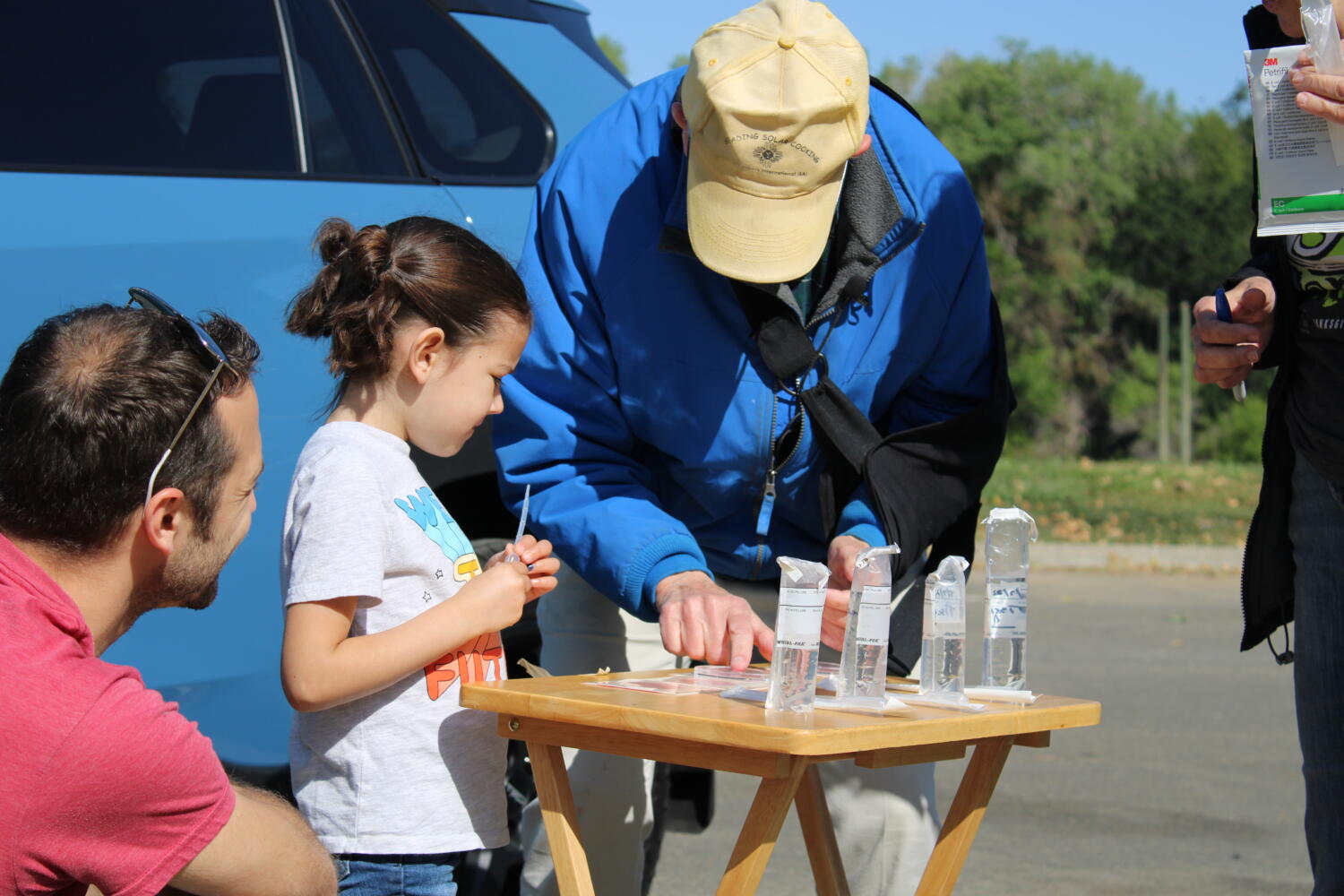 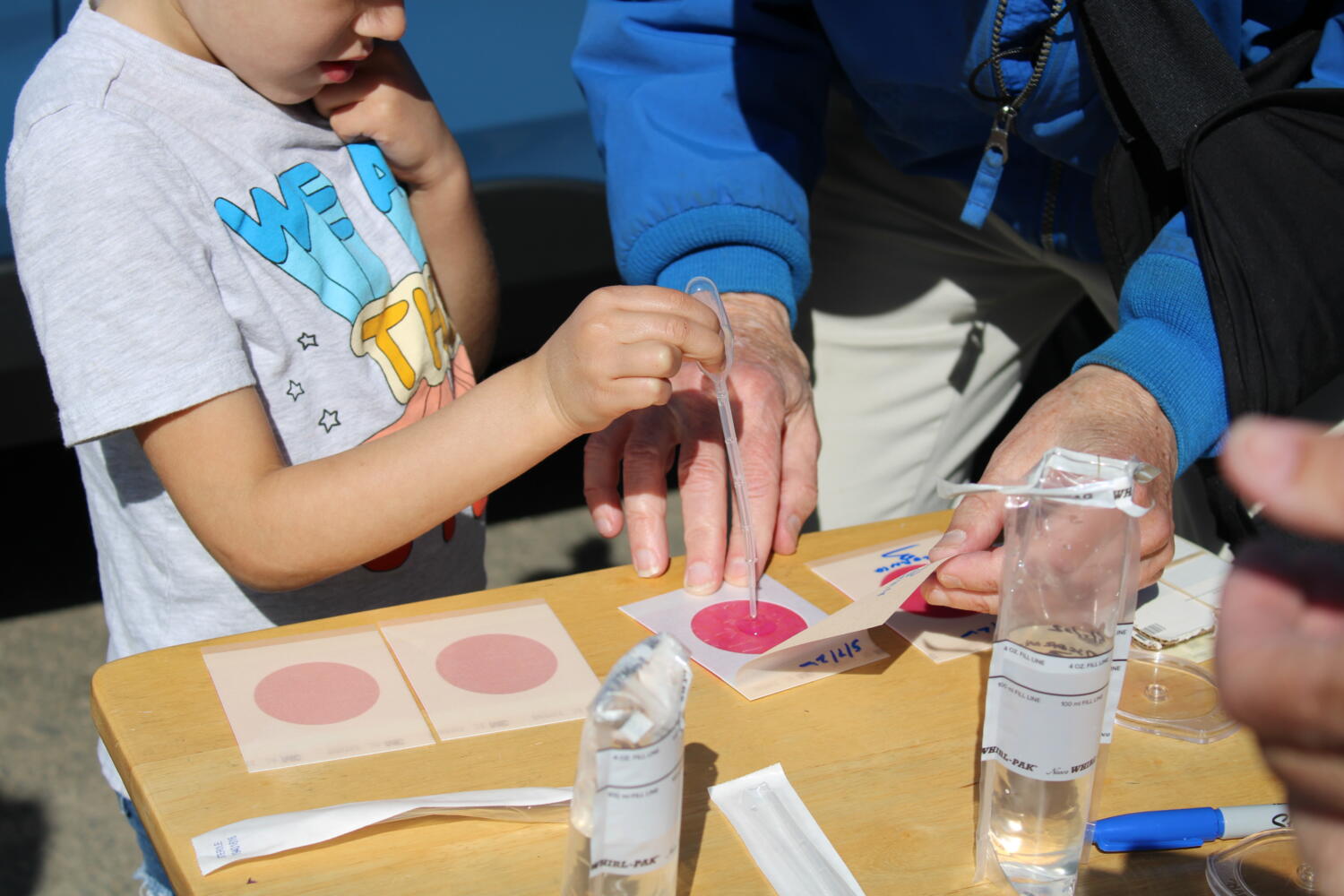 Thea transferring a Tiscornia Three water sample to its Petrifilm. As president of the International Water and Health Alliances (IWHA), Mr. Metcalf began funding Friends of the Old (FOTO), a community-based organization in Kisumu county in Kenya. Mr. and Mrs. Metcalf visit every year and help teach communities using this same method of testing to ensure clean water. 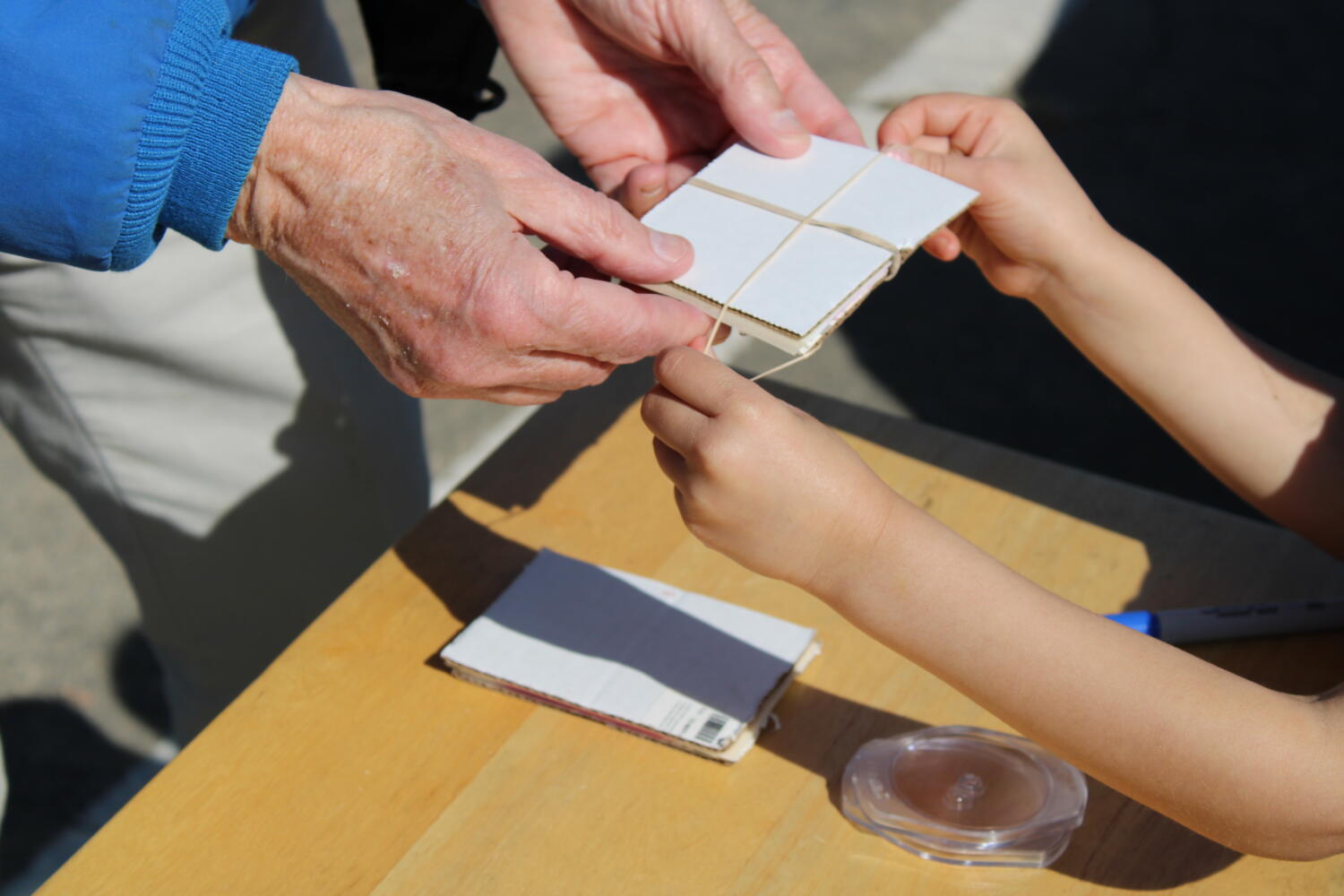 The four Pertifilm samples being placed between two pieces of scrap cardboard and secured with rubber-bands by Mr. Metcalf and Thea. The materials for 25 tests- 25 pipettes, 25 Whirl-Paks, and 25 Petrifilms, “You’re lookin’ at $40, plus postage,” Mr. Metcalf said. The pipettes and Whirl-Paks can be found on Amazon, and the Petrifilms are available on the 3M website.

Ryan Moskun with the water samples in his waistband where they incubated for about 12 hours. Body heat is enough to get the E. coli to grow. We sampled in the morning and kept the sample on us. Before we knew it, the 12 hours were up. 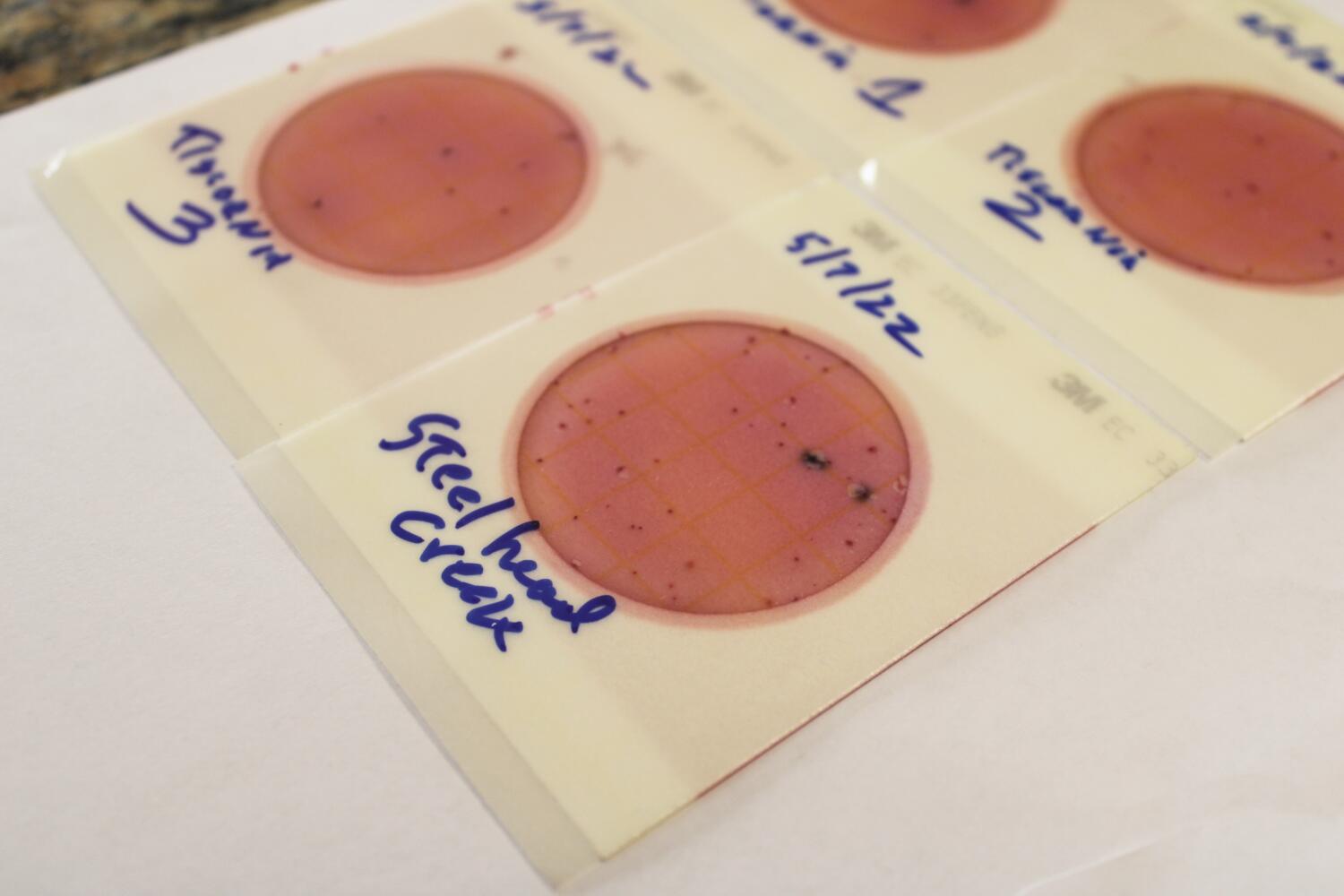 The cloudy, blue spots are E. coli colonies. The E. coli count per one milliliter of water is as simple as counting the blue dots! That weekend, there were two E. coli in Tiscornia Beach and two in Steelhead Creek. This was lower than the EPA maximum, but a stark contrast from two weeks prior which had levels of 13 E. coli in Tiscornia and Steelhead Creek. This year, samples have ranged from zero to approximately 150 E. coli. In a sampling in July of 2021, there were over 400 E. coli at the Tiscornia Three site.

“This is citizen science, You do not need to be a microbiologist in order to perform these tests and interpret the results. I know how to do the microbiology here, but in a day or two- or today- you could also say ‘I could do that,’ and that’s empowering communities to do important science. And, you know, this can also be done in all types of schools. The materials are not all that expensive,” Mr. Metcalf said.

This photo essay is one in a set produced by a team of journalist fellows at Sierra College who were awarded grants from the California Humanities “Emerging Journalist” Fellowship. Read more about the team and their project here: “Bends and Banks: Communities, Water, and the American River.”

Written and Photographed by Madalyn Wright