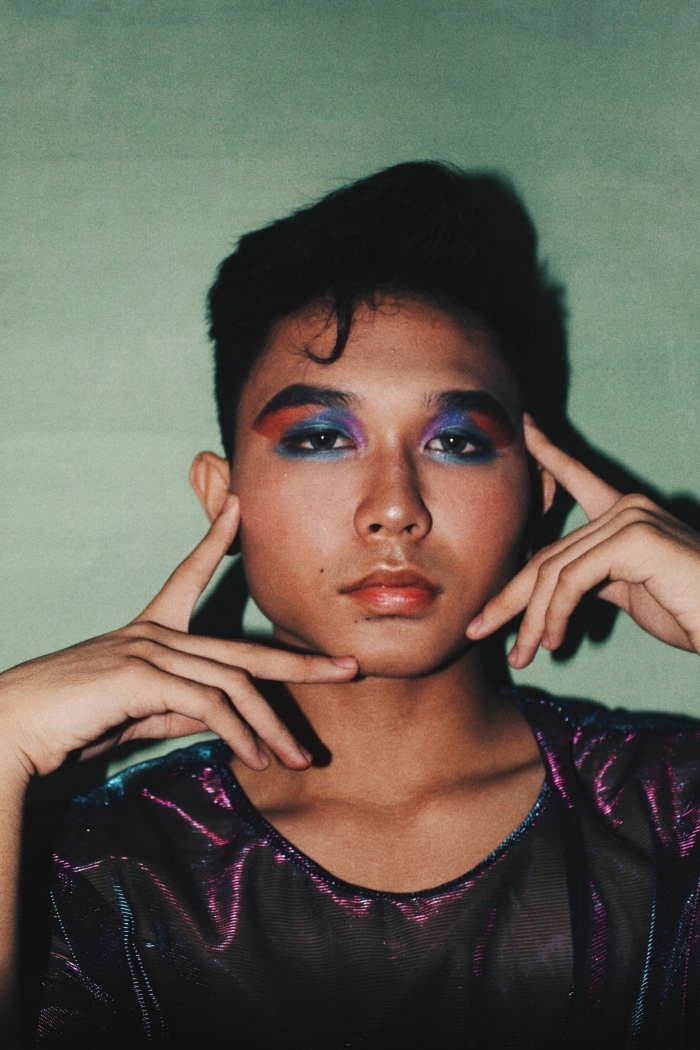 “I wish I could do that,” I say, showing my boyfriend a makeup post on one of the various sites I used to waste my hours on.

“Then do it” he replies, “You can pull off anything.”

Yet, something holds me back.  Sitting in my squeaky computer chair, makeup products cluttered along my desk and arms, the voice in my mind asks me, “But what if I’m going to be judged?”  I stare into the mirror, talking myself out of playing with the colors I envisioned while my cat in the background navigates the mess just to get to her sleeping spot.

In a past memory, I’m standing in front of my parents’ master bathroom, scrubbing my face raw with makeup remover wipes just to reapply my foundation to make it less cakey.  I’m leaning over the sink, creating wing like scars in the corners of my eyes that sting while numerous black painted q-tips surround me.

I tortured my face due to the various things that have been said to me by family members, from laughing at me for having my face caked in makeup to telling me that my winged eyeliner looks uneven.

Now, the venom that is spat at others in the online world just for wearing makeup scares me the most.  What if I post something on that will be mocked by the Internet? What if someone tells me I’m ugly with makeup on or that I’m vain for wanting to wear makeup?

It’s easily noticeable in an online world and will forever be stuck in the back of my mind whenever I think of doing something fun or creative with my makeup.

Despite the fear of I have of being judged by others, I never gave it much thought until the semester started.  During the first week of Newswriting and Reporting, we were assigned to find two news articles that we considered to be actual news while the other one had to be something we didn’t find to be newsworthy.

As I sat in the back of the class, the majority of my classmates had the same ideas of what they don’t find to be newsworthy.  It was typically entertainment, like the Kardashians that had endless news stories about them.

Yet, it sparked something inside of me as the class period ends and I’m shyly making my way up towards the professor to gain insight on what she thought about entertainment being news.

As everyone finally leaves, I ask her, “What do you call entertainment pieces if they are not news?” Before she could answer, I continued, “I enjoy makeup and video games, but everyone likes to say that it’s not real news and that no one cares while the same could be said about sports.”

We talked for half an hour and as I get ready to leave, I thank her and walk outside the classroom, not realizing that I will spend the semester trying to untangle the fear that has seeped inside me throughout the years.

It begins with Haley.  On a warm afternoon in October, I interviewed my classmate, Haley on the balcony of the Sierra College library.  She gave me insight different from my own opinions as I asked questions that I thought would have made her uncomfortable.

“Do you have any insecurities when it comes to wearing any makeup?” I asked.

“My biggest insecurity when I’m wearing makeup is more so along the lines of like, if I’m wearing lipstick, I’m worried that it’s on my teeth… I don’t really have any about how my makeup looks because I don’t really care,” Haley said.

I was surprised by her answer, as I’ve always felt insecure about putting color on my face in fear of someone poking fun at me or posting a photo of me online to mock me.  Nevertheless, I questioned her more, “Why do you wear makeup?”

“It makes me feel more productive,” she starts, “I’ve had really terrible acne in middle school, so I’ve been wearing it every day since… It started with covering my acne, but now I can’t get stuff done without makeup.”  I left the balcony of the Sierra College library feeling inspired by Haley, but I persisted my research to learn more about makeup and the insecurities people face when wearing it.

The Varying Opinions of Makeup

Back in my squeaky computer chair, the sound of my mechanical keyboard clacking fills the room as I sought out any news articles written with makeup in mind.  The first thing that pops up is “School Removes Makeup After Parents Complain.”. Written by Jessica Long, the gist of the article was a school that had decided to add an elective that helped students, “express their creativity, talk about puberty, and learn the difference between ‘sexually provocative’ and ‘appropriate’ appearances.”

However, most parents thought differently, stating that a class that taught students how to do makeup was “outdated and wrong on every level.”  One thing that stood out to me was one parent saying that they didn’t understand why the school didn’t offer something, “…more artistic, like learning nail art, or theatre makeup and face paint.”

I’ve always held the opinion that makeup is artistic and a creative outlet for many.  No one actually views makeup as artistic, which is why I find it a little silly that one mom thought nail art and theatre makeup and face paint is more artistic even when they are classified as beauty along with makeup.  However, I can also see that makeup is at the root of people’s problems when it comes to their insecurities.

With more clacking, “Alicia Keys and the ‘Tyranny of Makeup’,” is another article I found about Alicia Keys going makeup-less.  Written by journalist, Penelope Green, Keys mentions the insecurities she faces when being a woman in the public eye.  The makeup she used was her armor, because she questioned her bare face, asking herself, “What if someone wants a picture? What if someone posted it?”

However, what cosmetic executives Linda Wells and Bobbi Brown said intrigued me.  Wells wondered, “…that fashion is considered self-expression and makeup is self-absorption? Or something more pernicious?” and went on to say that, “To me, we’re not all passive victims. Make your choice, like Alicia Keys. Decide what makes you feel confident and enjoy it.”

Bobbi Brown had a similar statement, saying that, “…It is the ugly Internet we live in. Let’s be nice to people, and not be so judgey.”  The article gave me insight on why a lot of people tend to view makeup as something that is bad rather than something artistic.

Another article, “Being a Girl: Pressures & Pitfalls,” showed a few examples of what I see online.  Author Linda Abdel Hafeez wrote, “If a girl doesn’t wear makeup, she’s a slob, but if she likes wearing makeup, she is trying too hard.”

Vox Pop: Why Do You Wear Makeup?

Despite my findings, I wasn’t satisfied until I stepped into the Nordstrom at the Galleria Mall.  Making my way towards Sephora, I repeat the same question inside my head that I wanted to ask to whoever I found working.

The striped black and white building comes into view, a sign with an ad lit up by LED lights flickered as I make my way towards the entrance.  The sound of pop music immediately fills my ears as I navigate through shelves of makeup products in search of an employee.

“Hi, I just want to ask you a couple of questions” I say, as I approach the first Sephora employee named PJ, her eyelids painted in gold shimmer with a pop of blue mascara.  “I’m a student at Sierra College and I’m currently writing an article on makeup for my Communications class,” I start, “I want to know why you wear makeup.”

“In the beginning, I used to wear makeup to cover my acne” she replies, “But since I cleared my skin up, makeup as become a habit and an outlet for me.”

“Have you had any negative comments towards your makeup?” I questioned.

“I don’t necessarily think they were mean, but I was known as the person who wore blue eyeshadow.  Blue eyeshadow is my absolute favorite thing and if I feel like putting it on, I will.” She said, laughing.

I thanked PJ for her time and started walking through the rows of makeup products again.  This time, I found Alysia, her eyes smoked with a pretty pink eyeshadow, a dramatic winged eyeliner, and matte lips.  “Makeup for me is an artistic outlet” she says, “I mainly get backhanded comments where people say that they don’t want to look like a cake face like me.”

Kristel was the last person I ran into while in Sephora, her eyes also smoked a pretty pink with a subtle sparkle, a less dramatic eyeliner, and pink lids.  “Makeup is required for my job” she laughs, “I think it’s fun, but at the end of the day, I can’t wait to take it off.”  Before I left, Kristel mentioned that people can easily hide themselves behind a screen and that’s why we see a lot of negativity online.

Walking out of the Sephora, I wasn’t expecting to run into anyone else, but I met Stacey while looking inside Box Lunch.  I immediately noticed the blue sparkly eyeshadow and purple lips, so I wanted to ask her my question.

“I think of makeup as art” she said, “It’s an artistic outlet for me and I enjoy playing with colors and makeup.”

“Have you had any negative comments on your makeup?” I questioned once again.

After asking the two questions I had to whoever I could find, I start my evening shift at See’s Candies while playing each conversation in my head repeatedly, coming up with different ways to write my story.

My story doesn’t come to life until I walk through the doors of my home and ask my questions one last time to the person who has allowed me to express myself with no judgements, my mom.

“Why do you wear makeup?” I asked.

“To cover up my imperfections” She said, “Why do you wear makeup?”

“To express myself artistically because I suck at drawing on paper” I joked, “Have you ever faced any negative comments when it came to wearing makeup?”

“I used to wear a ton of eye shadow when I was younger.  Your grandma and papa liked to joke that I look like Boy George, but don’t publish that,” she laughed.

With each person in mind, I make my way downstairs to my squeaky computer chair and begin to start typing and deleting words endlessly until the time shows five am.  With my journey coming to an end, I have learned the different experiences women in general face when it comes to wearing makeup.  I’m surprised and inspired by the different voices I have heard.

Despite growing up being told that it’s okay to express myself, I still feared judgement from others.  However, the same problem I have may not be similar to someone who faces different insecurities.

On the other hand, the world and its views are forever changing and maybe someday, people won’t look towards makeup as something that should be demonized, but rather something that is fun and artistic, like painting on a canvas or drawing.

I’m still growing as a person and untangling myself from the fear that I have steeped within me. But I will move forward and paint my face with the colors I envision myself in and hope that I will be the next inspiration to come when someone wants to paint their face, too.

Parenting and family planning have evolved in countless ways over

In this 8:22 minute video, Journalism and Communications: Reaching your