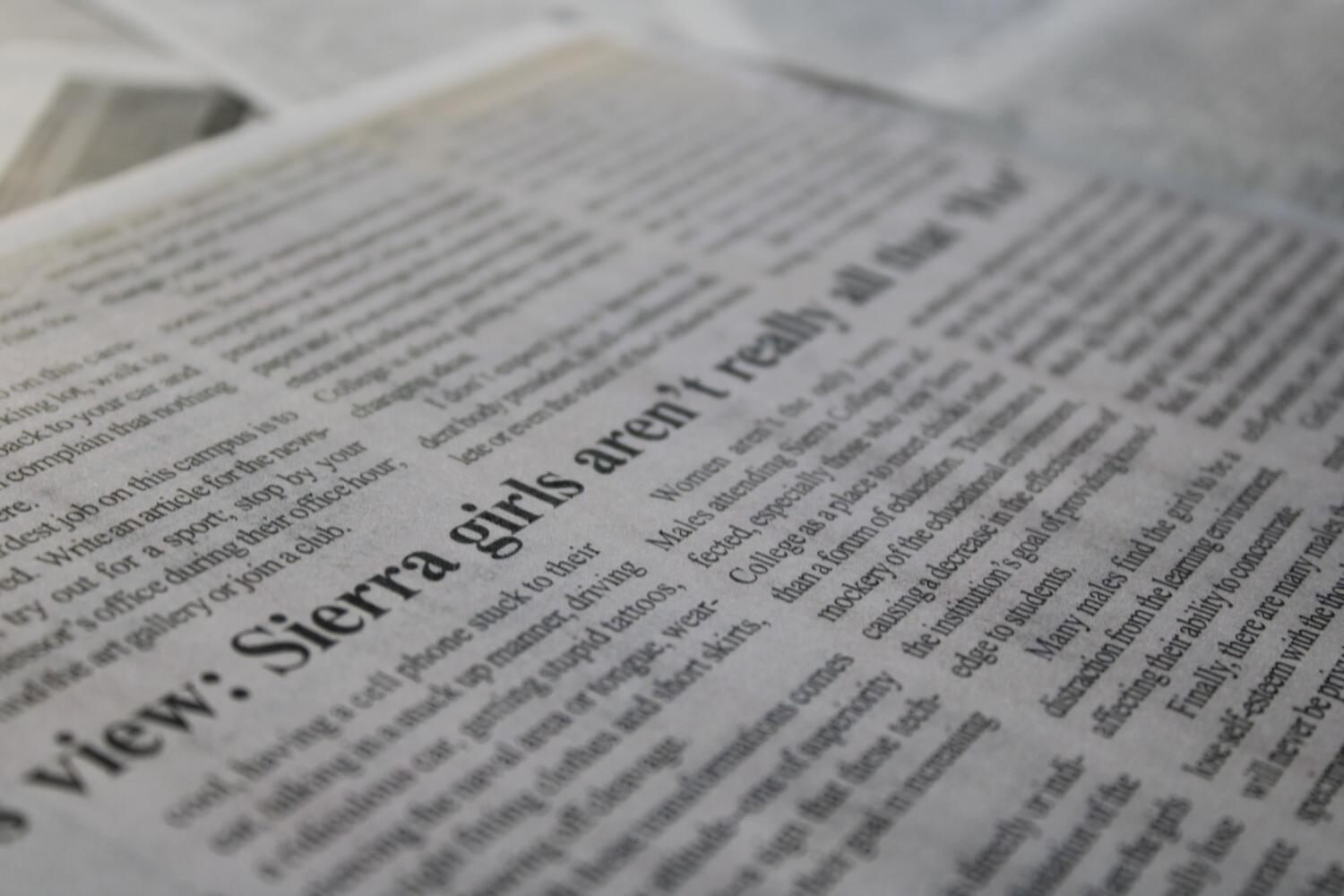 When looking back on the events, it’s easy to be caught up in the controversy. In 2003, Sierra College’s student newspaper, The Outlook, accepted an op-ed titled “One Person’s View: Sierra Girls Aren’t Really All That Hot.” With statements like “I find the majority [of women at Sierra] to be stuck up, bitchy, and self-centered.” The op-ed unsurprisingly earned negative responses from students writing to the editor, national media, and even the California National Organization for Women.

Obviously, what is “hot” and what isn’t is a very subjective metric. In a later interview, the student said he had meant to make a statement about the cold attitude and unfriendly behavior he experienced on campus. “The conversation[s are] ‘hello, goodbye.’ It’s not ‘hey, how are you doing, hey I’m doing really well…I want somebody that I can sit and conversate with.”

Let’s go forward with this metric, then: a “hot” individual is someone who is open to conversation and who instigates conversations in a manner that feels safe and friendly.

One could ask what our current campus environment stacks up to be using that metric. Answering that question is, ultimately, worth revisiting the flawed article that sparked controversy nearly twenty years ago.

Playboy Magazine and similar media outlets have long been a subject of controversy and deserved criticism. Rankings of ‘party schools’- a reputation some colleges don’t know they had- included a focus on the appearance of the female student body. In 1992, Southern Illinois University clashed with Playboy over the latter after asking an alleged 200 or more female students to participate in a photoshoot for an upcoming magazine.

A video by Comedy Central and an article in the Gold Country Media both cite Playboy Magazine as the crux behind The Outlook’s opinion piece. It was written in response to what its author called “corporate media’s exploitation of women.” This exploitation was very much alive and well in 2003.

Look no further than Comedy Central’s response video on the controversy. While this is very clearly intended for comedic purposes, the Daily Show piece feels more sexist than the Outlook’s op-ed as host Stephen Colbert stares at an 18-year-old student’s breasts, touches a girl’s thigh, and jokingly attempts to get the girls, whom he deems “smokin’ hot,” to wrestle him.

Despite the legitimacy of media exploitation and sexist environments as a topic, the op-ed fell short as newsworthy journalism. The Journalism Association of Community Colleges’s 2019 publication contest guidelines gives an example of what an opinion piece should include: significance of topic, factual support and documentation, and fairness. Sierra Girls Aren’t Really All That Hot lacks factual support, documentation, and fairness.

Whatever message it may have had is lost in a practical rant about tans, piercings, tattoos, tight clothes, and more. An anonymous reader of The Outlook wrote a letter to the editor in response that says, “The author, in his attempt to point out how women have become objectified, commits the same crime that he seems adamant to admonish.”

Unfortunately, no substantial criticism of media exploitation or the campus community’s environment was made in this op-ed. Should the campus have felt unwelcoming to multiple students in 2003, their words would have carried weight in a more important conversation: one on local safety and community.

We’ll keep that idea in mind as we look on at the campus community of Sierra 19 years later.

I spoke with student Chrishelle Ward, who had an opinion of her own on the op-ed’s stance, saying

“[if] you can interview people around campus and have them be like ‘no I feel safe at this campus, people are kind, then it just proves him wrong twice over.”

In the Spring semester of 2022, I made my way across various spots on campus to do exactly what Louis claimed he wanted to be able to. I found fellow students, sat down, and talked with them about their experiences with others on campus.

The results were conclusively optimistic.

“There’s no outgroup,” student Grace Wigel said as we sat in the Math building.

“All the professors I’ve had have been kind, all the students have been kind, so I feel like they have done a good job fostering student-student relations here…Everyone’s here to just learn and be students,” Wigel later said. “I don’t feel alienated.”

When asked how they would feel about being approached by an unfamiliar student on campus, the verdict came down to one thing: intentions.

“I think it all comes down to your demeanor, what you put off,” Ward says.

This was echoed by Nadia Ansari while we spoke in the Wolverine Cafe, “If the person’s coming at me with a really aggressive tone, I’m like omg, I get the internal ick inside.”

“Obviously everyone has to be cautious with any type of interaction they do, but I feel like you can tell when a person has ill intent towards you,” Wigel said along those same lines.

“If I’m walking to class and you’ve got those people who are sitting trying to sell you something or get you to do something, and I’m like ‘no leave me alone, I don’t want that,’ ‘don’t bother me please.’ That doesn’t make me feel comfortable or safe at all. I don’t like being bothered. That’s me though,” Ansari says.

When no bad ‘vibes’ are present, the students- introverted and extroverted- seem open to conversation.

“It’s always been easier and put me more at ease if they’re kind in their demeanor, very open,” Ward says.

Despite this clause, Ward goes on to say,

“Luckily I’ve had really great experiences. Usually, people who approach me will compliment my earrings or my shoes, or say I look pretty, and I’m like oh my gosh, thank you, wow, you’re so cool.”

“I mean, I’m not too social of a person,” Wigel says in contrast. “So I really haven’t stopped to talk with a lot of people passing by. But I’ve never had any issues with anyone.” When asked about how she felt when she was the one approached Wigel shrugged to say, “I’m pretty open to it.”

Zachary Murphy and Ansari sit together quietly at their cafeteria table while they consider the question.

“I don’t mind it,” Murphy answers. “We’re all in school, we’re all doing the same thing, trying to grow, trying to aim for the same ideal goals. I believe school is about making those connections, being able to be public, and talk to each other. I don’t mind it at all.”

Ansari answers differently. To her, it depends on the conversation and her mood. “There’s moments when I chose to be extraverted,” she says. On those days, Ansari is more open to talking. “I’m like ‘ok I’m down to have a conversation, what do you want to talk about?’”

Overall, these students have mostly positive thoughts on Sierra’s ability to foster community.

“I would say on average when it comes to student on student interactions, they’ve been pretty positive,” Ward says.

These students push to make interactions positive experiences for others.

Murphy wasn’t the only one who had been engaged in this open community before our interview. Ward says she talks with strangers on campus “usually at least once or twice” a week. Right before our interview, Ward recalls having had a fifteen-minute conversation with an English student she’d never talked to before.

“I’m a more talkative person so it’s easier for me than others,” she says.

Fretas was interviewed at the Science Building on campus and reported trying to find people to chat with between classes as much as he can.

As for what areas the college might be able to make their campus community feel even more welcoming, the students had a few ideas. Ward hopes to see the Drip Cafe- where we were sitting for our interview- open for business soon and for the construction on campus to end soon. Ansari mentions that the new parking garage could use more lights.

Ansari would also like to push for more changes in the way the college fosters a sense of inclusion. Murphy agreed.

“I feel like there could be more, as she said. Just because as a young Black man, tall, maybe standoffish, you feel like the odd man out. And also sometimes I’m the only Black kid in my classes,”

The results are in. Students can in fact approach other students and spark up a conversation (that can sometimes even be deep). Whether it is in indoor eating areas, outside tables, top floors of buildings, or points of traffic on campus, there are few students who rudely cut others off or act “superior” to them the way the op-ed complained.

Sierra College of 2022 has an open, green, and welcoming campus with friendly students and staff. Even considering the opinion piece may have had a point against the cold, exploitative environment of the time, what can we say about Sierra College today?

By the article’s own metric, the results are simple.

Sierra girls really are all that hot.