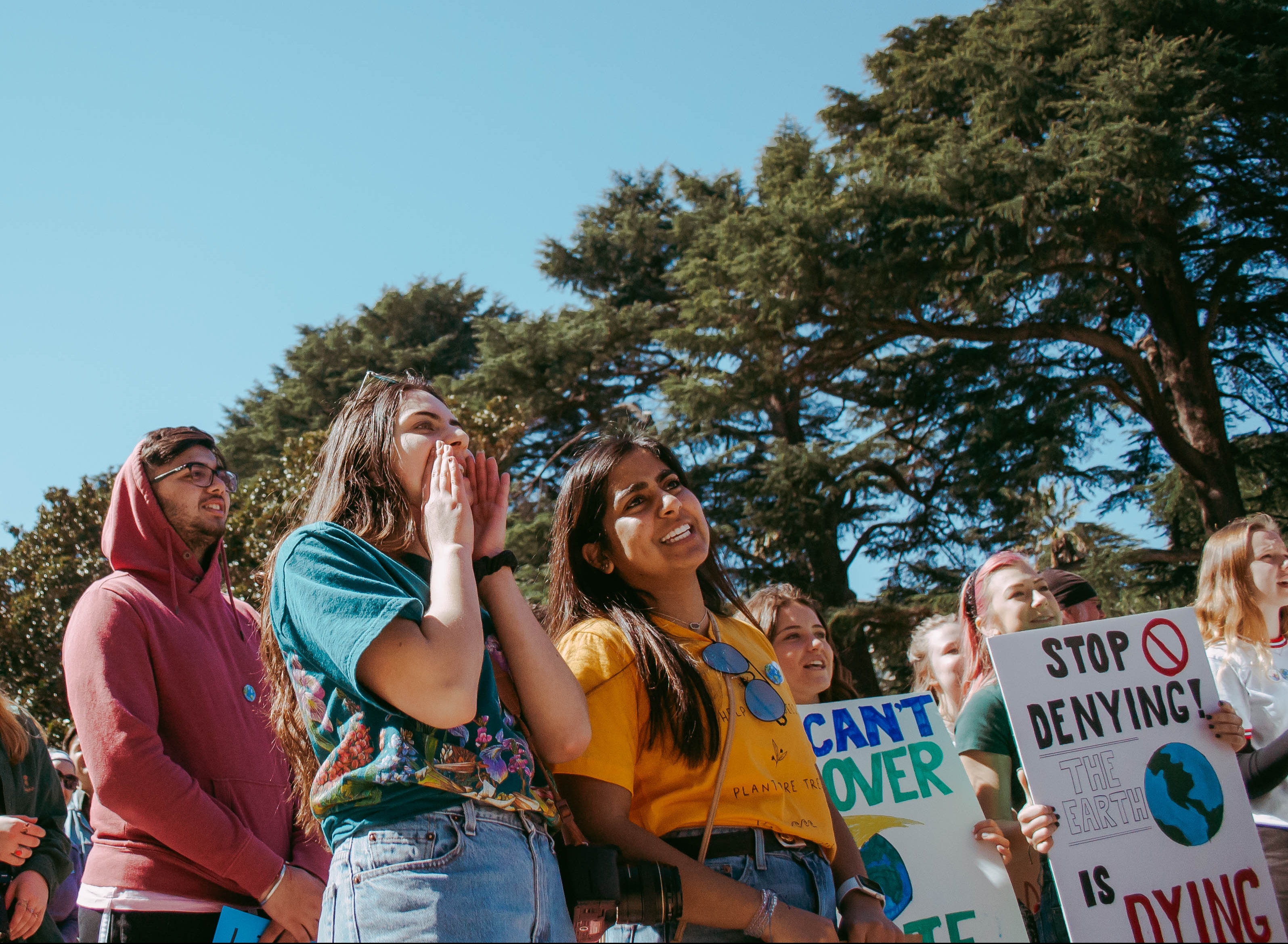 The broad, stone steps of the Sacramento State Capitol building were crowded with young people hoisting homemade signs into the air. The air rang with the sounds of protest: “No more coal! No more oil! Keep your carbon in the soil!” More than 200 voices chanted in unison, led by the abrasive, static crackle of a megaphone. A group of elementary aged children displayed a hand-painted banner that read “Kids Climate Strike” decorated with paint handprints. Another sign held by a teenage girl read “This planet is getting hotter than my imaginary boyfriend!”

At the podium, Austin Michael, an organizer for Sacramento’s Youth Climate Strike, read out the demands of the students striking from school. “We need all decisions made by the government to be based on the best available and most current scientific research. The world needs to reduce greenhouse gas emissions by at least 50% by 2030, and by 100% by 2050. We need to incorporate that fact into all our policy making, whereas right now it’s currently being ignored by much of our legislators. We need to declare a national emergency on climate change. This call for a national emergency is because we only have a few years to avoid catastrophic climate change. Since the U.S. has empirically been a global leader, we should be a leader on climate change.”

He continued by outlining the group’s demand for climate education. “Another thing that we’re fighting for is compulsory, comprehensive education on climate change and its impacts throughout grades K-8. K-8 is the ideal age range for compulsory climate change education because impressionability is high during that developmental stage, therefore it is easier for children and young adults to learn about climate change in an in-depth manner and retain that information. And climate change thus becomes a non-partisan issue as it truly is, because it’s based solely on science from the beginning.”

The striker’s demands include passing the Green New Deal resolution, halting all fossil fuel infrastructure projects, ensuring all decisions made by the government be tied to scientific research, declaring a national emergency on climate change, and compulsory comprehensive education on climate change and its impacts for children in kindergarten to eighth grade. The strikers aim to push policies that will limit the global temperature rise to 1.5 degrees Celsius. A 2018 United Nations report cited that if that temperature threshold of 1.5 degrees Celsius is surpassed, the world could face disastrous consequences of climate change.

The demands of the United States Climate Strike are in line with the Green New Deal resolution introduced by Senator Ed Markey and Representative Alexandria Ocasio-Cortez which proposes massive mobilization of the economy to move away from fossil fuels and transition to a renewable, carbon-neutral economy by 2030. Integral to the resolution is the plan to use the transition to create a more just economy that aids currently marginalized groups of people. The leaders of the Sacramento strike also used their platform to promote the proposed Assembly Joint Resolution 7, a resolution in the California state assembly that supports the Green New Deal.

Although the U.S. branch of the Youth Climate Strike focuses on changing American public policy, the protest was not limited to the United States. The Global Youth Climate Strike is a movement that began with one teenager in Sweden taking a stand for what she believes in. Greta Thunberg is a sixteen-year-old high school student who began her solitary protest by striking from school every Friday, biking to the parliament building, and protesting the lack of action her government had taken on climate change. She shared her efforts on social media with the hashtag #FridaysforFuture. Her protest inspired other young people across the internet who soon joined in the Fridays for Future movement sharing their own strikes with the hashtag. The movement caught on like wildfire and culminated on Friday with over 1.5 million students striking in 2083 cities in 125 countries on every continent. Environmental group 350.org called the event the “biggest day of climate action ever.” Shortly after the event, Greta Thunberg was nominated for the Nobel Peace Prize.

In direct response to the Global Youth Climate Strike, the secretary general of the United Nations, Antonio Guterres, announced that he is calling a summit on climate action. In his response in The Guardian, he announced, “I am bringing world leaders together at a climate action summit later this year. I am calling on all leaders to come to New York in September with concrete, realistic plans to enhance their nationally determined contributions by 2020, in line with reducing greenhouse gas emissions by 45% over the next decade, and to net zero by 2050.”

Meanwhile, there are many ways young people can continue to get involved locally. Along with continued strikes at the state capitol, Austin Michael suggested some specific ways he recommends that people continue to take action in the coming weeks. “With the mayor’s commission on climate change, they are asking for people to come give public comments at the assembly natural resources committee hearing on AJR7. You have to do more than just show up to the strike. While showing up to a strike shows a presence and shows that people care, showing up to those other events can do even more.”