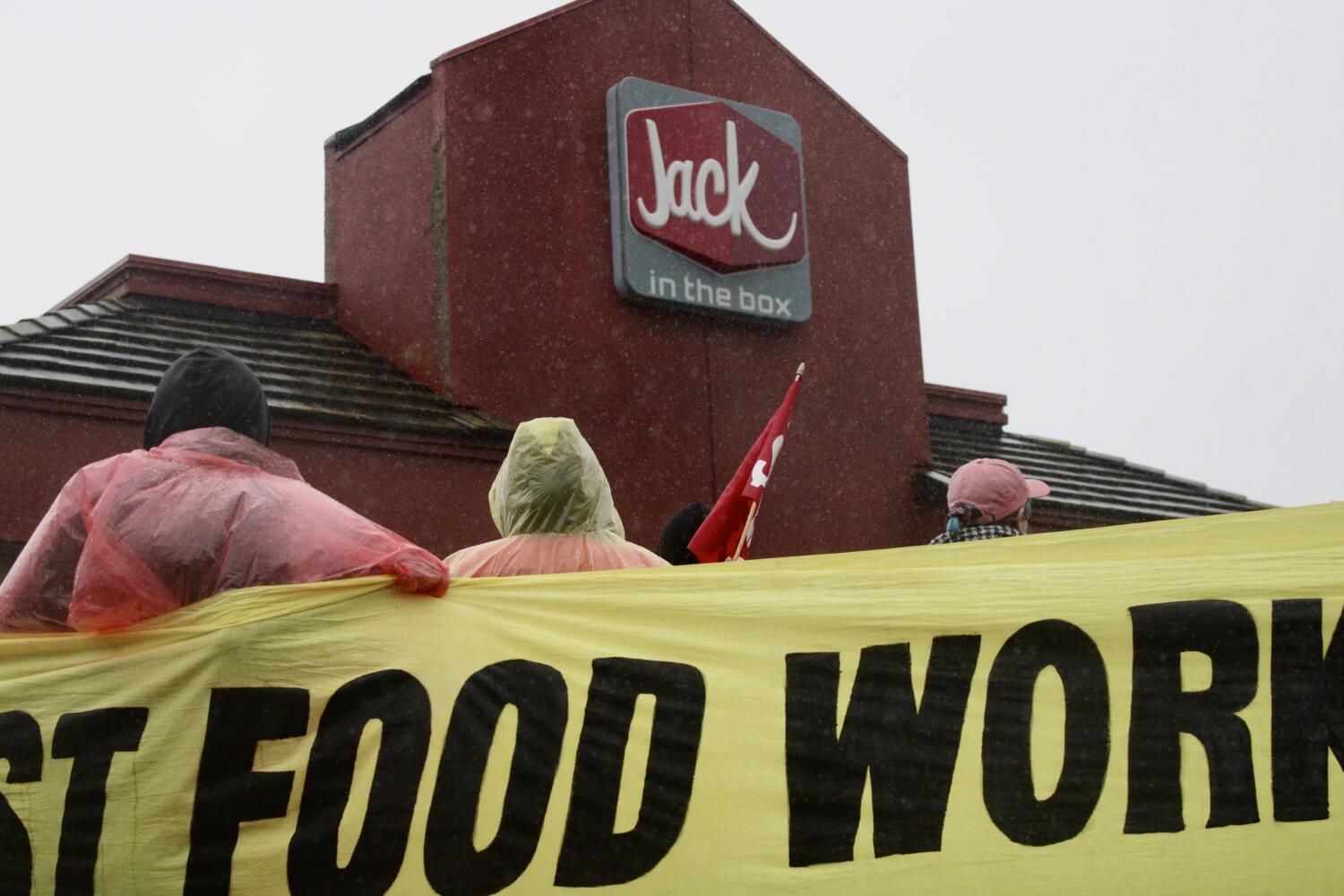 The year 2020 redefined the word, “essential.” Home essentials, health essentials, work essentials, but most notably essential workers. Though the Fight for 15 movements began in 2012, the COVD-19 pandemic brought a new wave of unionizing movements to fast-food chains across the nation. After years of unsafe working conditions, low wages, lack of accessible healthcare, sexual assault, sexism, and racism, fast-food workers of the Sacramento area are fighting back.

Strikes on the Rise

On November 9, 2021, a strike was held at a Jack in the Box in Folsom, California. This wasn’t your average picket line blocking the door- they took over the drive-thru. Several attendees strategically placed their cars around the entrance so that no customer could squeeze in on either side of a large truck that was backed up into the drive-thru. At noon, dozens of people unloaded from their cars in Fight for 15 shirts, flags, and banners. They carried signs as big as themselves depicting money bags and labeled “CORPORATE GREED.” Another sign of the same size was of three fists with “WORKING PEOPLE” at the bottom.

Workers, union organizers, Fight for 15 coordinators, Senate candidate Dave Jones, and supporters flooded the drive-thru. They set up a speaker and microphone and made their voices heard. This particular Jack in the Box is on a busy street corner, and supporters carried a large yellow banner

that faced out towards the street that said, “FAST FOOD WORKER POWER” in English and Spanish, along with the Fight for 15 and FAST Recovery Act hashtags for passing traffic to see. In the hour that the protestors blocked the drive-thru, several cars arrived in an attempt to get lunch only to turn back around and leave- some more upset than others. Customer comments ranged from, “Good for them! Stick it to the man!” to “Why don’t they go get a real job instead of getting in the way of my afternoon?” The group was unphased. During chants and speeches, the supporters in their cars to block the entrance honked in support.

Several workers gave speeches, talking about the loss of wages, sexist comments, and unsafe working conditions. Stories ranged from Management’s refusal to follow COVID-19 protocol and make sure the employees can get tested and access to PPE to sexist remarks like being told that the female workers were just “on menopause” when the workers asked for the air conditioning to be fixed during the last Sacramento heat wave and even threats from management to call immigration on the employees if they organized- something that sparked a protest at the same location on October 15, 2021.

Fabrezio Sasso, the Executive Director of Sacramento Central Labor Council, gave a passionate speech about striking until the workers get what they deserve. “Protect them [by] being able to make them a few dollars by serving a few hamburgers? Is that what you’re here to do? Protect corporate profits?” Sasso said.

The crowd yelled back “No!”

“You work for us! You work for the people! And [the people] are being screwed every day by these large mega-corporations like McDonald’s and Jack in the Box and Taco Bell and Burger King! They are getting their wages stolen! And what are they doing about that?” Sasso said.

He went on to call out the lack of workplace safety and demanded “workplace dignity.”

Burger King employee and speaker at the strike, Arianna Navarro, spoke with Roundhouse after the November 9 strike. She explained that she first got involved with Fight for 15 by her manager when she first started fast food. “She wanted to get us started on the path and get us organized… I was told by a co-worker of mine that once an organizer comes in the store that we are supposed to call the police on them,” Navarro said. On the stigma and intimidation of workplace solidarity, she noted, “Once [an organizer] comes into the store we aren’t supposed to serve them. If they come in with flyers we aren’t supposed to interact with them. So that just goes to show how much corporations are against workers unionizing and organizing.”

Navarro talked about how her store has employees of minority groups who have a difficult time getting high-paying, college degree jobs in a society that demands them. She told stories of managers getting physically assaulted by customers and getting burned by a fryer which she still has a scar from and no first-aid products being in the store, not even a band-aid. Navarro explained:

I called my boss when it happened. It was a burn, I had touched the fryer to my arm. He didn’t answer at first. I checked the first-aid kit, the bandages were completely out. No band-aids, no ointment, no burn spray, no nothing. So, I called him again, he finally answered and he said, ‘Put some mustard on it.’

Dave Jones, a candidate for Senate in 2022 also spoke. He started by introducing himself, then pointing behind him to the banner that read “WHICH SIDE ARE YOU ON?” and announcing, “I know what side I’m on!” This was met with cheers. Jones went on to explain that there are two Californias- one full of CEOs and the economic elite, and one made up of hardworking men and women who “simply want the ability to provide for their families and loved ones, who work hard each and every day, who are not paid adequately a livable wage, who are not provided health benefits, who are not provided safe working conditions, who are not given retirement pensions. Now I know what side I’m on, I know what side you’re on. But we need to make sure that every assembly member and every senator hears what side they need to be on. What side do they need to be on? They need to be on the workers’ side!”

After several speeches, a group of workers gathered around the microphone and sang a song of camaraderie before the protestors made their way through the drive-thru and to the front of the store where they continued talks, chants, and gave interviews to some local press, Roundhouse included.

In a follow-up interview with Dave Jones, he explained that the strikes are rallying around the proposed bill AB 257 and gave endless credit to the workers’ dignity and claimed that their current working conditions are “dismal,” commenting in particular on sexual harassment, extreme heat, lack of healthcare, intimidation, wage theft, and being denied meal and rest breaks. On the proposal of bill AB 257, Jones states:

This is really an important bill because it will give the workers a voice and an opportunity to get decent wages, health benefits, and working conditions by creating a council that will set those standards state-wide.

When asked about opposition to the bill, Jones explained that because the wages and workplace conditions are currently only up to the CEOs who are “squeezing the workers,” that California taxpayers end up spending $4 billion a year covering health benefits and other care. “So, why should the state of California taxpayers pick something up that’s really the responsibility of the employer?” Jones commented.

The AB 257 bill, also known as the FAST Act (Fast Food Accountability and Standards Recovery Act) would create a council made up of the CEOs, franchisees, and workers of fast-food restaurants to set basic industry standards such as wages, safety training, and health benefits as well as create a system of accountability. The bill was initially introduced by Assembly Member Lorena Gonzalez on January 15, 2021, and was struck down in June of 2021 but can be brought back before legislators in January of 2022.

In every interview and speech their passion, drive, and determination were palpable. The workers are hoping to continue to gain momentum and continue strikes throughout California to put more and more pressure on the passing of AB 257 in January and make their stories heard, loud and clear, by every single legislator. Having won a $15 minimum wage across 10 states, the workers and organizers won’t be giving up this fight any time soon and have realized that together they are unstoppable.

Written and Photographed by Madalyn Wright

It has officially been two years since the start of