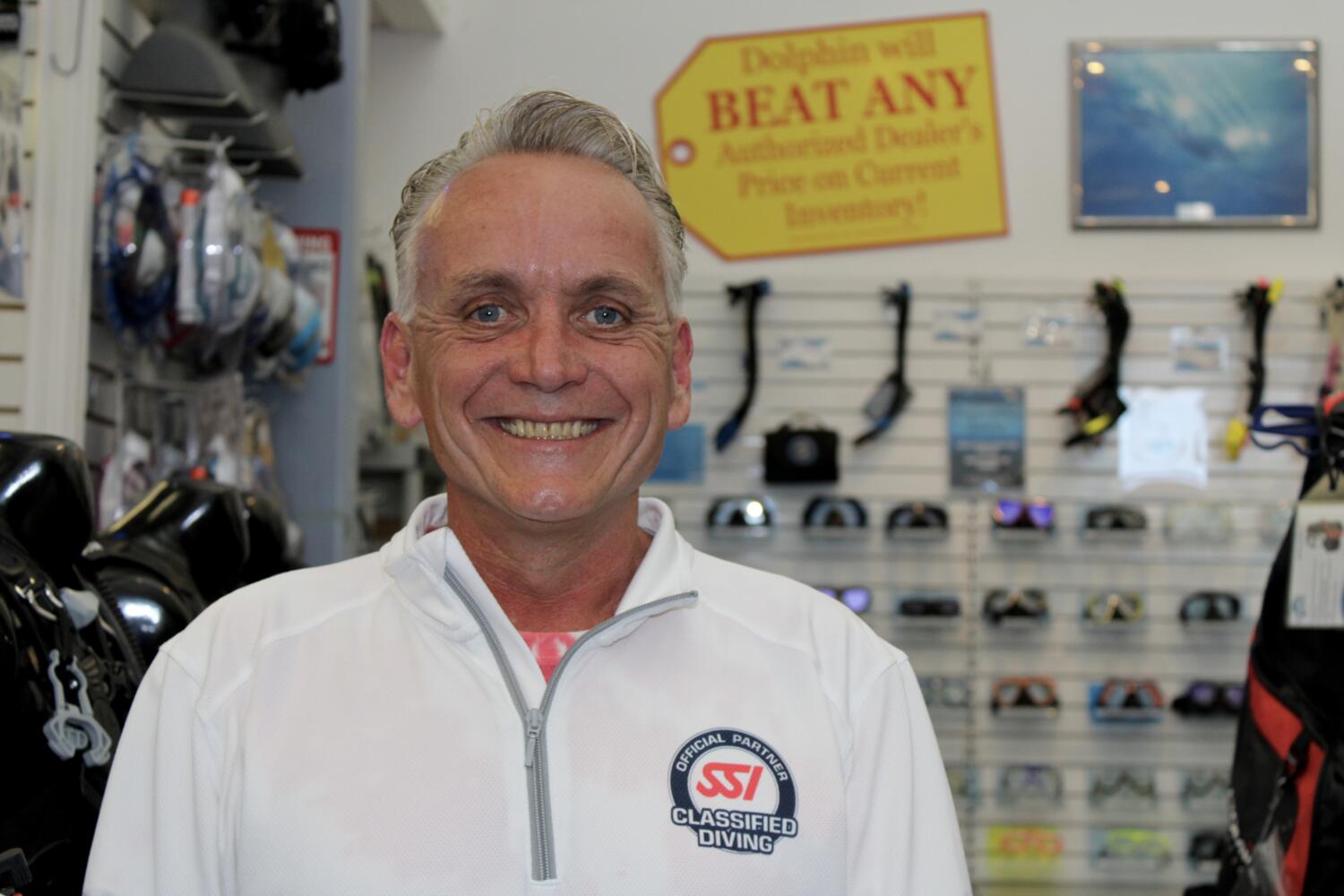 Born and raised in Sacramento, Steven Bruegeman grew up with National Geographic on all the coffee tables and the kitchen counter. Almost everything in his life has been tied back to California ecology. After going back to school in retirement and getting a degree in Environmental Conservation, Bruegeman found Dolphin Scuba- the Sacramento scuba diving hub. Now a pro, Bruegeman takes on river clean-up dives and teaches kids scuba and Ecology Awareness. I interviewed him on May 11th at Dolphin Scuba.

“I wasn’t supposed to be getting a job with all my degrees, it was like I said just to keep myself from getting idle. But then when I found scuba I learned that the two could be totally interwoven. Now I get to teach it,” Bruegeman said.

His excitement about diving, teaching, and his community is infectious. He noted that the Dolphin Scuba dive shop is like his clubhouse and that he is there all the time. Even his wife has gotten in on the action- she is the ‘best shore mate a diver could ask for,’ in Bruegeman’s words, having taken a dive-specific first-aid course. Now she is diving as well. On why he stays so involved with Dolphin Scuba, he says:

“I come here for entertainment and recreation and travel, and whatever we want to do.”

His favorite part? Teaching the kids- especially the Ecology Awareness piece of curriculum. Most people think that scuba diving is reserved for crazed adrenaline junkies who have never been afraid of sharks. In reality, almost anyone can dive. Kids can start learning how to use the equipment and dive in swimming pools at eight years old. At twelve, they can move on to open waters. Ecology Awareness is a tangent of the diving curriculum that covers preserving the environment and being an ecologically responsible diver.

“The ecology part of it- I like throwing ecology into every aspect of diving. Everything from snorkeling, staying off the bottom you know don’t injure yourself don’t injure the environment… whatever I can do to start them young, that’s kind of my new passion,”

He jokes that he loves teaching homeschooled kids because their flexible schedule allows him and his wife to really immerse the kids in the curriculum like creating experiments for explaining Boyle’s Law and putting UV-lit artificial reefs in the pool for the kids to explore and test their skills. Soon Dolphin Scuba will have the Civics Ranger specialty for kids as well which focuses on environmental action in their communities.

“My plan is to get them out at an active dive site like we have almost every weekend at Negro Bar or Folsom Lake so we can actually meet some of our divers and classes out there and say… let’s clean up the area and we’ll have a kind of ecology class,” Bruegeman said.

The dive club sponsored by Dolphin Scuba does two official river cleanup dives a year. However, groups of divers regularly get together and dive the American River and clean it along the way. Dolphin Scuba is one of about five shops in the nation that had specific river diving instructors. One of their instructors has been diving since the 70s and knows the Sacramento waterways as much as he knows the streets- if not better.

“There’s so much- it’s a pick-up-what’s-safe kind of a dive. Don’t pick up the glass, that kind of stuff. If it’s got hooks in it, leave it. Because you’re moving with the current, if you’re trying to pick up linage you don’t know what’s on the other end… So if you can swoop it as you go by, get it,”

The American River has struggled with fluctuating, dangerous E. coli levels for years. Diving and moving through the water comes with a cost-benefit analysis. When asked if he ever got worried about being in E. coli waters he noted that he is concerned, but that it isn’t going to stop him from diving there. He makes an effort to stay away from docks and not spend much time on the beaches and prefers to be in the areas of running water and current, where the bacteria levels are less likely to be critical.

Not only do the river dives entail harmful bacteria, but the water levels get low and can damage the scuba gear as the divers move along the cobble. Scuba gear is expensive but for good reason- it’s a life support system. Equipment that allows a human to safely breathe in sometimes hundreds of feet of water isn’t something you find in the value section. Bruegeman explained that sometimes snorkeling is the better option and can keep him from having to haul his scuba gear across dry sections of the river.

The divers bring burlap sacks and a boat on the clean-up dives. By the end, there are several bags full of cans, shoes, fishing gear, and other litter commonly left behind by boaters in the river.

As a local diver myself, I know that California divers have a reputation for being a special breed. We train in water temperatures around 50 degrees Fahrenheit and around Sacramento, our first experience diving outside of a swimming pool is after we swim out into the Monterey Bay and get in the water where there is only 10 feet of visibility. California river divers have an extra edge to them.

Bruegeman loves the diving community and the camaraderie that comes with it. It’s not a very competitive sport, and divers have to trust those around them to make sure each dive is safe. Divers are known to stop and help any other diver they see, from helping move their gear to the beach, noticing a safety hazard, or trying to get off a hooded wetsuit.

He explained that there are a plethora of reasons why people dive the American River. Some truly want to clean it, others are sick of the litter, and some just love a good excuse to go out and dive. The one reason they all have in common is community. After being immersed in scuba and ecology for almost three years, Bruegeman is as passionate as day one.

“Cleaning up? I don’t mind doin’ it. I don’t mind telling the kids it’s important, too. You know, it gets the parents out and they help and I think without it, it would just be atrocious out there for sure- without the locals.”

The “locals” aren’t just the divers crazy enough to take on the river. It’s the Sacramento area Creek Week volunteers and other groups that take the time to clean up the river banks. It’s eco-conscious visitors that leave the river better than when they arrived. It’s cultivating a culture of community care.

This story is one in a set produced by a team of journalist fellows at Sierra College who were awarded grants from the California Humanities “Emerging Journalist” Fellowship. Read more about the team and their project here: “Bends and Banks: Communities, Water, and the American River.”