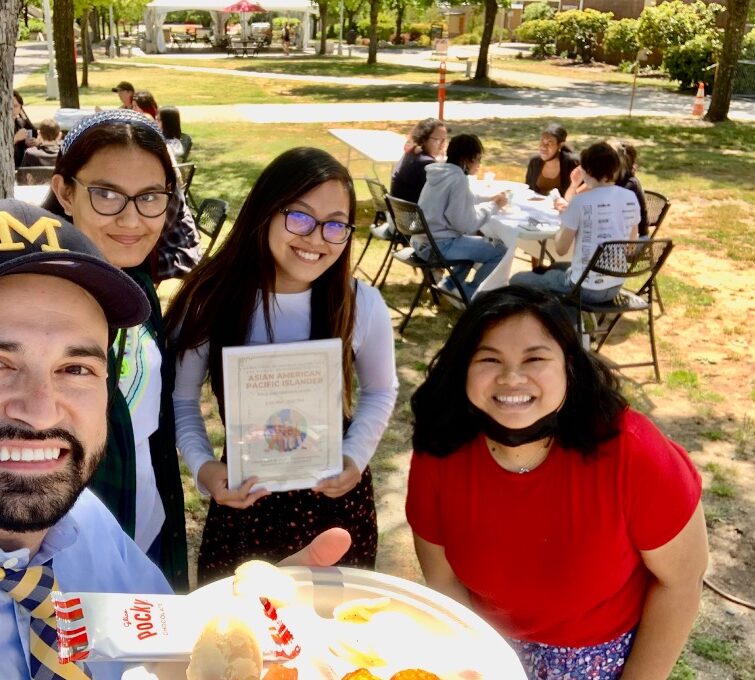 After seeing the increase in hate crimes towards Asian Americans during the COVID-19 outbreak, I wondered if one day I would be one of the victims I saw on the news. Working in a grocery store for almost 40 hours a week I was outside in the world for the majority of the time, putting myself at even more risk.

In 2020 the hate towards Asian Americans increased by 77% according to the Federal Bureau of Investigation (FBI), a statistic that was always in the back of my mind. After two years of hate and in honor of it being May, the month dedicated to Asian American and Pacific Islander (AAPI) Heritage, I wanted to replace that hatred and fear with an appreciation and celebration of Asian culture.

Originally it was only a week-long celebration that was proposed by Frank Horton, a New York representative in 1980. During The Bush administration in 1992 it was extended to a month then renamed to AAPI Heritage Month in 2009 under Barack Obama.

Throughout history, AAPI have migrated to the United States, often having to fight for their rights to even be here. In 1882, Congress enacted the Chinese Exclusion Act which restricted Chinese immigration for 20 years. In 1907 Japanese immigration became restricted through the Gentlemen’s Agreement.

After years of fighting to be able to migrate to the States, the surge of the Civil Rights Movement in the 1960s allowed the flow of immigration to come flooding in, but Asian Americans were still treated as foreigners instead of fellow Americans.

22 million Americans are of Asian descent with them now making up 7% of the United States population. As years go by this number only increases.

Sierra College is a predominantly white school with approximately 58% of the student body being white. The rest of the population is about 21% Latin(o)(x)(a)(e), 3% African American, 3% Filipino, 6% Asian-American, 1/% Native American, and 7% multiracial.

Seeing that Sierra is mainly those who are not AAPI identified, having a “Folx and Friends” mixer allowed everybody to come together and be more united after two years of division and isolation.

On May 3, 2022, I held a mixer for the student body of Sierra to participate in along with the help of Serjio Acevedo, the Student Engagement Centers Director/Program Manager, Maria Joy Valdez, a Student Support Specialist, and the Feminist Action Club treasurer, Emma Beltran Gonzalez.

The goal of the event was to broaden the horizons of the student body at Sierra and introduce them to food and music that they may or may not have ever heard of before. While this was one of the goals, there was also a goal to involve AAPI identified Student Scholars to participate. “It was more than just wanting to appreciate or celebrate the AAPI culture. Appreciation and celebration is only an entry point for what the Student Engagement Centers wants to do.” Acevedo said about the goals of the event.

The music began blasting around 1:30 PM to draw attention to ourselves, proving useful when multiple people came up asking

what was happening. We told them that we were going to be holding a mixer at 2:00 with free food and music. On the table already laid down was a tray of lumpia, homemade puto, Pocky, mangoes, strawberries, Hawaiian chips, and shrimp chips.

When the time came we had people coming up right off the bat. The food was flying off the table, almost not lasting us the entire hour. We gave index cards to everybody seated and asked them to write down their favorite AAPI identified musical artist and a song that they would like us to play. With all of our index cards collected, we started our playlist.

Along with the index cards we handed out postcards with sayings from different Asian cultures. On the front would be a design, then on the back would be a saying/word/phrase from a certain culture along with the English translation.

I looked around and saw lots of smiling faces, indulging themselves with the free food. Four tables were full, there were plenty of people standing eating or observing the mixer. Students and staff alike were partaking in the festivities and showing appreciation for the Asian culture.

“We had an amazing turn-out and I loved seeing the tables filled with students playing board games, talking about Asian American music, or getting to know one another.”

Before people had begun to leave, Acevedo brought everybody to the AAPI banner located at the entrance to the Student Services building and took a picture, commemorating this special day.

Due to the pandemic, all in-person events were canceled and celebrations were brought to a halt.

While this is the first event for AAPI Heritage Month, there were more events done later in the month. These events were the Diversity Uncovered and Conscious Conversations, Native American and Pacific Islander Graduation Celebration, and LGBTQ+ Experiences in the Asian Desi American Community.

With this being the beginning of Sierra College celebrating Asian American and Pacific Islander Heritage Month, there is still more work to be done for future years to properly commemorate and understand the importance of cultural diversity on campus.

Why Should I Celebrate if I’m not AAPI Identified?

While most of the student body at Sierra is not AAPI identified, there is still a need for others to celebrate AAPI Heritage Month.

Celebrating this month allows people to understand the contributions AAPI have made to the United States while also dispelling the harmful, negative stereotypes. After the increase of hate crimes towards Asian Americans, a celebration and understanding of the culture and its many cultures within it is much needed.

“AAPI is American history, but it is not a history that we are taught. So, we need to create the space to be able to learn cultural history and share our stories. It is important to learn about our history because we can’t tell where we are going until we know who we were. It allows us to know our identity.”

Valdez said about the importance for schools to celebrate AAPI Heritage Month.

In high school classrooms, there is little taught about Asian American history. But this is changing, in 2021 Illinois became the first state to mandate Asian American History as part of the school curriculum and News Jersey followed in their footsteps.